During the first quarter of 2019, Cortellis Deals Intelligence registered 1,023 new deals (excluding mergers & acquisitions) as part of its ongoing coverage of licensing activity in the life sciences sector, a minor decrease of 0.6% from 1,029 in Q1 a year ago. The total disclosed deal value rose to $44.9 billion, a 26.8% rise from the $35.4 billion accounted for in the same quarter last year, but a slight decline of 3.0% in total deal size compared to the fourth quarter of 2018 ($46.3 billion).

The number of deals announced decreased by 8.9% from 1,124 in Q4 2018. However, the total deal value for the first quarter of the year was the highest ever for the same period over the last five years (see Figure 1), led by AstraZeneca and Daiichi Sankyo’s $6.9 billion deal covering the phase III anticancer HER2-targeting antibody-drug conjugate, trastuzumab deruxtecan (DS-8201). 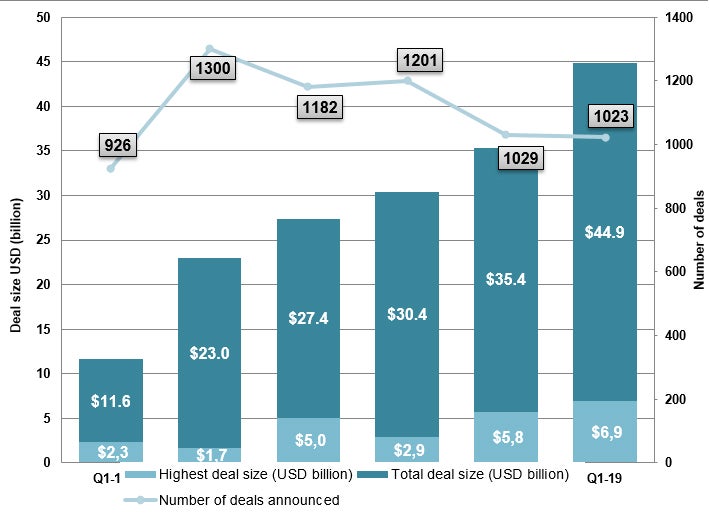 266 deals signed across the cancer space

Cancer remains the main therapeutic area in volume (266, 26.0% of the total deals signed in the first quarter) as well as in high-value deals (the AstraZeneca-Daiichi Sankyo $6.9 billion deal is also followed by others, including the $4 billion GlaxoSmithKline-Merck KgaA and Abpro-NJCTTQ alliances) achieving $358.8 million in average deal size by indication.

However, 24 deals (2.3%) focused on dermatology with an average of $407.8 million, due to the $1.4 billion deal between Almirall and Dermira covering the phase IIb anti-IL-13 monoclonal antibody lebrikizumab as well as the $1.0 billion agreement between Exicure and Dermelix for spherical nucleic acid (SNA) therapeutics against rare skin diseases, including Netherton syndrome.

A total of 10 deals (0.9%) at an average of $383.2 million focused on hematologic conditions, including the agreement between Apellis and SFJ to develop the phase III synthetic cyclic peptide APL-2 for up to $640 million and the $827 million paid by Royalty Pharma for intellectual property and royalties for Ligand Pharmaceuticals’ eltrombopag, launched for thrombocytopenia (see Figure 2). 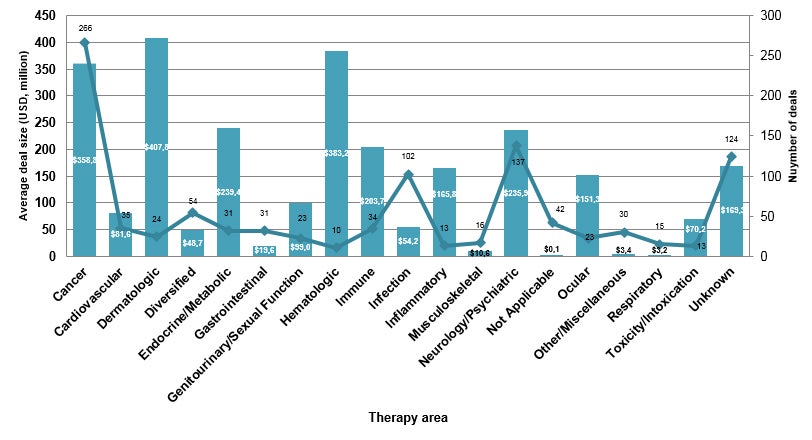 We tracked 24 high-value new non-M&A deals worth in excess of $500 million (10 of which reached more than $1 billion) during the first quarter of 2019. Most of these deal values are based on contigent payments with the main assets still in early stage development. Cancer is the main therapeutic area covered by these deals, followed by neurology, dermatology and hematology.

AstraZeneca (AZ) and Daiichi Sankyo signed the highest value pact for this quarter ($6.9 billion), granting AZ rights to Daiichi’s trastuzumab deruxtecan (DS-8201), an HER2-targeting antibody-drug conjugate composed of trastuzumab attached via an enzymatically cleavable peptide-linker to exatecan, currently in phase III for metastatic breast cancer and also developed for multiple solid tumors. AZ would make a large upfront fee to the Japanese firm ($1.35 billion), which could earn up to $5.5 billion in milestone payments ($3.8 billion in regulatory milestones and $1.75 billion in sales-related milestones). Both companies would share profits and costs worldwide, excluding Japan.

Following the recent acquisition of oncology firm TESARO for $5.1 billion, GlaxoSmithKline (GSK) continued to reinforce its anticancer portfolio obtaining rights to Merck KGaA’s bintrafusp alfa (M-7824), a TGF-beta receptor type 2-avelumab combination, currently being compared to pembrolizumab in a phase II trial in patients with non-small cell lung cancer. Merck would receive an upfront fee of $342.3 million, up to $3.9 billion in milestone payments (including $570.5 million and $3.3 billion in development as well as regulatory and commercial milestones fees, respectively). GSK and Merck will work together in the development of the drug, sharing profit and costs.

Chinese Nanging Chia Tai Tianqing (NJCTTQ, a subsidiary of Chia Tai Tianqing Pharmaceutical Group [CTTQ]) teamed up with U.S.-based Abpro to develop seven bispecific antibodies, including T-cell engagers, using Abpro’s DiversImmune antibody discovery platform. Abpro would retain rights to any approved compounds outside of China and Taiwan, and NJCTTQ would retain them in China, in exchange for up to $4 billion, including $60 million in near-term R&D funding, plus potential milestones and royalties.

Companies based in China, Japan and Australia led licensing activity in Asia-Pacific during the first quarter of the year, registering 83, 79 and 58 deals for each respectively.

Editor’s Note: All data contributing to this analysis was sourced from Cortellis Deals Intelligence, from Clarivate Analytics

Click here to see the Cortellis team’s full Q1 licensing report, including more analysis on Asia-Pacific deals, profiles of the quarter’s most prolific dealmakers, updates on milestones, options and terminations, as well as a preview of Q2.