Have you ever heard of a drug called Viagra? It is a drug for the treatment of erectile dysfunction and pulmonary arterial hypertension. There is also a very famous medicine in Korea, and it is Hanmi Pharm’s ‘팔팔’. 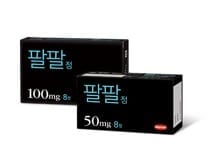 If you search in a Korean dictionary, the word “팔팔(palpal)” is defined either as:

It is commonly used as a nuance, or colloquialism, meaning that a person ‘is still alive(팔팔), even though they are old’. Hanmi Pharm also seems to have this nuance and named ‘팔팔’ for its product that improves deteriorated function.

However, there are quite a few products that use the expression ‘팔팔’, as it is frequently used in everyday life and has a positive meaning. In particular, its use is prominent in medicines and health supplements. If you just search Google for the word ‘팔팔,’ you can see Hanmi’s ‘팔팔,’ and other several other products such as health food ‘청춘팔팔,’ and “혈관팔팔’. One might have a rational question that if a word like ‘팔팔’  is used widely in various products, can it be approved as a trademark that has exclusive usage.

In March last year, the KIPO(Korean Intellectual Property Office) dismissed the claim of Hanmi Pharm in a trademark invalidation lawsuit filed by Hanmi Pharm. (darts-378-569-G-ko). Hanmi Pharm claimed that a trademark ‘氣八八(기팔팔)’, which is a trademark for a dietary supplement, should be invalidated because the mark 氣八八(기팔팔) is a violation of Article 7 (1)(7)(Notwithstanding Article 6, none of the following trademarks shall be registered: Any trademark which is identical or similar to another person’s registered trademark for which the application was filed earlier, and which is to be used on goods identical or similar to the designated goods) and 7(1)(11)(Any trademark which is feared to mislead or deceive consumers concerning the quality of goods) of the old trademark law.

In this regard, KIPO believes that trademark similarity must first be recognized in order to check whether the trademark violated Article 7(1)(7) or 7(1)(11). Therefore, KIPO first judged this and concluded that the two brands are not similar.

“Even if there is a difference in appearance and title, in the conception, if a normal person sees the registered trademark(氣八八(기팔팔), the meaning of ‘has strong energy’ will come to mind. Considering the relationship between the pre-registered trademark and erectile dysfunction treatment drug and sexual dysfunction medicinal product, which is a designated product, the general consumer or trader can easily think of the meaning of ‘has strong energy’ when they see the pre-registered mark(‘팔팔’). Thus the concepts of both trademark which contain the word ‘팔팔’ are similar. Therefore, even if there is a difference in the appearance and name of the two brands, it is difficult to see that the difference overwhelms the similarity of the concept…Both marks are similar.”(darts-783-875-H-ko)

Based on this, the Patent Court decided that “(氣八八(기팔팔)” is a trademark that may be deceptive to the consumer, corresponding to Article 7(1)(11) of the old trademark law.

“If a registered trademark corresponds to a trademark that may deceive a consumer under the provisions of Article 7 (1) 11 of the Old Trademark Act, the trademark or product may be recognized as a trademark or a product of a specific person by a domestic consumer or trader. In such a case, if there is a special situation in which a trademark identical or similar to the previous trademark is used in a product identical or similar to the used product, or if the trademark is misused as being used by the owner of the trademark, there is a concern that the use of a registered trademark may mislead the consumer by causing misunderstanding and confusion of the source. … Pre-registered mark(팔팔) was sold more than 22 billion won in seven months after its launch, ranking third in the market share. In 2014, it was ranked No. 1 in market share, and since then, it has continued to rank No. 1 in market share in prescription amount and prescription volume. … Thus, the pre-registered mark was known enough to be recognized as a trademark of a specific person by domestic consumers or traders, and it is reasonable to say that it was recognized as a well-known trademark…

‘Medical food’ is defined as ‘medical food, that is, dietary food’ in the food science and technology dictionary. In the nutrition dictionary, it defines ‘medical food’ as ‘food for medical use and food used for meal therapy, but in general, medical food generally refers to special purpose food for patients among special nutritional foods prescribed by the Food Sanitation Act.’ Therefore, among the designated products of this case trademark, `Dietary supplements, dietary supplement health supplements, mixed vitamins, vitamins and minerals dietary supplements, mineral supplements, micronutrient food supplements, medical dietary foods , medical diet and fortified foods’ can also be classified as pharmaceuticals according to their nutrient content, and their use is similar to the products of pre-registered mark(팔팔) which is a medicine used for the treatment and prevention of diseases.” (darts-783-875-H-ko)

It is now difficult to use ‘팔팔’ in other health foods or medicinal products as Hanmi Pharmaceutical’s prevailing use of ‘pal-pal’ is recognized. As trademark lawsuits increase day by day, it is important to fully understand existing landmark cases and to keep abreast of emerging cases in order to gain an advantageous position in legal disputes.