The unmet need for precision medicine in Lyme disease

In the U.S., about 30 million people suffer from rare diseases. Lyme disease, rare but considered endemic across much of the Northern hemisphere, is nicknamed the “Great Imitator” based on its ability to mimic other diseases. Globally, since the 1990s, investigators have reported up to a 320% increase in Lyme cases (Johnson 2020, Johnson 2018).

This article presents real-world evidence for the limited usage of current treatment options for Lyme in the U.S., primarily antibiotics and the anti-inflammatory drug Dapsone. Current treatment regimens appear insufficient since the Lyme-causing Borrelia bacteria can undergo genetic mutations, expressing varied surface proteins and multifaceted chronicity and symptom profiles. Due to this ability to mutate, there is an urgent need for precision medicine in the form of single or combination interventions.

In the U.S., more than 120,000 new cases of Lyme disease have been detected each year, according to an analysis of Clarivate’s Real World Claims Data Product. All patients with a primary diagnosis of Lyme disease, identified using respective ICD-9 and ICD-10 codes, were included. We entered first record for disease diagnosis in a particular year to ascertain an incident Lyme case and replicated this analysis for each year between 2016 and 2019. 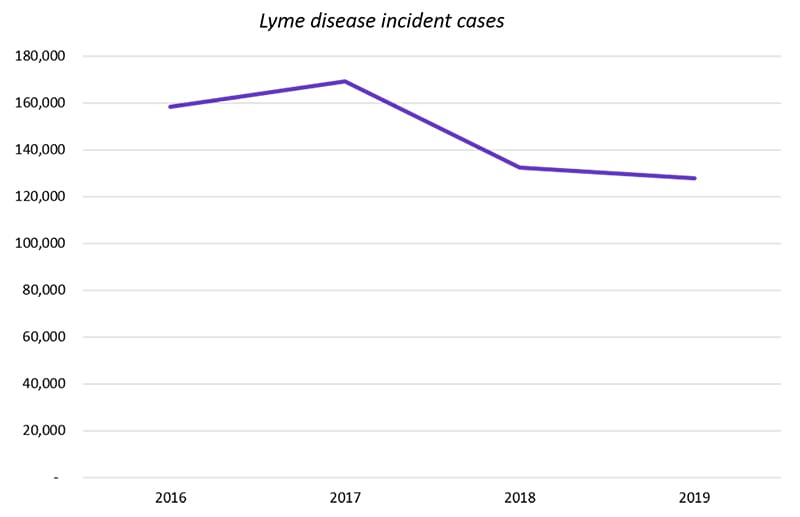 Despite high incidence, our claims-based analysis revealed that antibiotics were only used in 17% of cases between 2016 and 2019, with the highest treatment rate of 19% in 2017. We assessed Lyme treatment using pharmacy and procedure claim records identified using NDC codes, CPT, HCPCS, ICD-9 and ICD-10 procedure codes. We evaluated the use of antibiotics (rifampin, tetracycline, doxycycline) for all diagnosed incident Lyme patients. 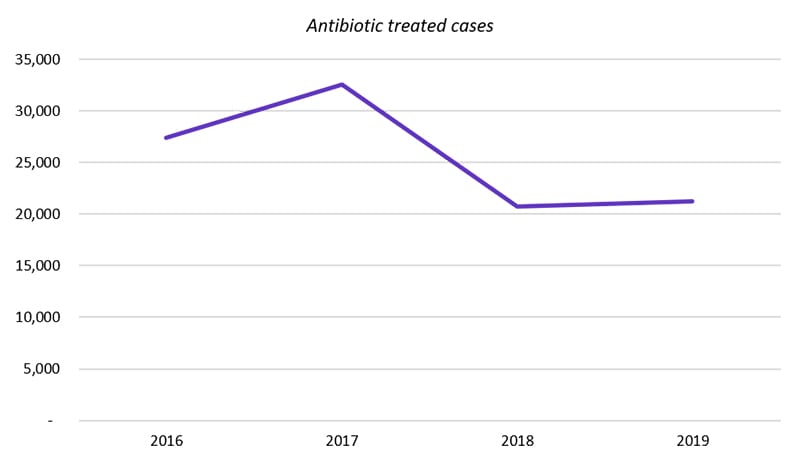 Despite promising efficacy in some studies, Dapsone use not common for Lyme disease

In recent years, there has been a move to repurpose the leprosy drug Dapsone for Lyme disease. Dapsone, also used for tuberculosis, is an anti-inflammatory medication that has shown promising efficacy in some Lyme studies (Horowitz & Freeman, 2019; Horowitz & Freeman, 2018; and Horowitz et al, 2020). Our real world data product analysis did not find frequent use of Dapsone among the diagnosed incident Lyme patients, with proportion of treatment <1% over the period of 2016-2019, inclusive.

How are emerging treatments poised to address the unmet need for Lyme therapy?

As chronic Lyme incidence and complications in patients increase, clinical studies have doubled in the past three years. Current trials are focused on both antibiotics (85%) and vaccine candidates (15%), with about 30% of the studies being conducted in the U.S. (Figures 3-5). However, despite routine antibiotic therapy, a real-world study by Johnson et al reported that only half of the treated patients showed improvements (Johnson 2018).

Figure 3. Country-wide distribution of Lyme studies. A comparison with 2017 data showed that clinical trials have doubled in the last three years. 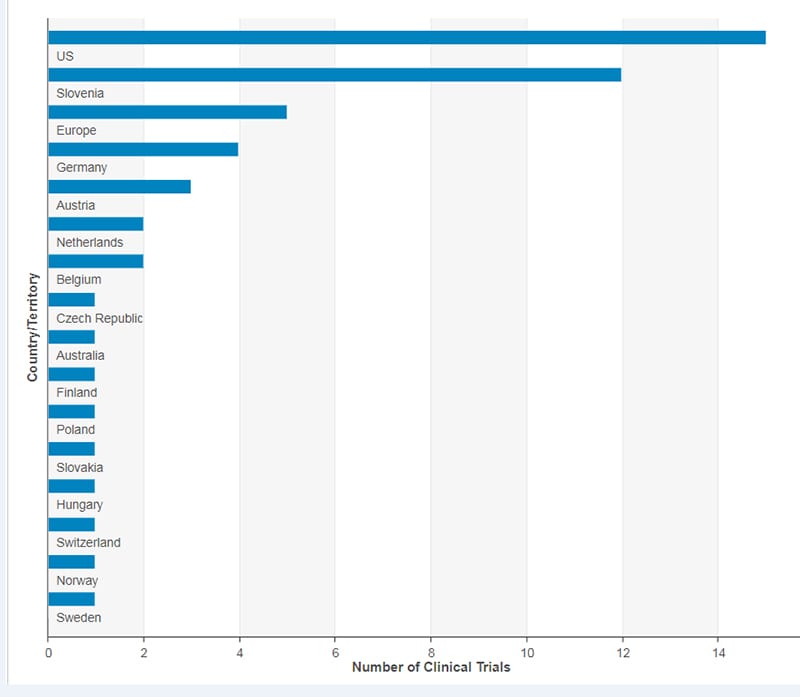 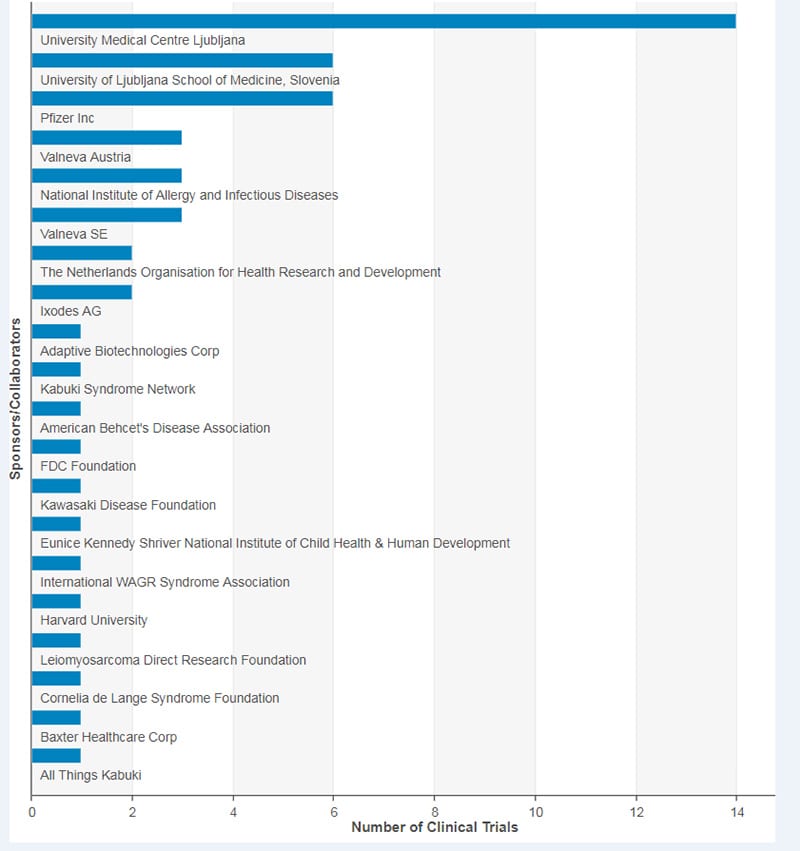 Figure 5. Antibiotics and vaccines under development for Lyme disease 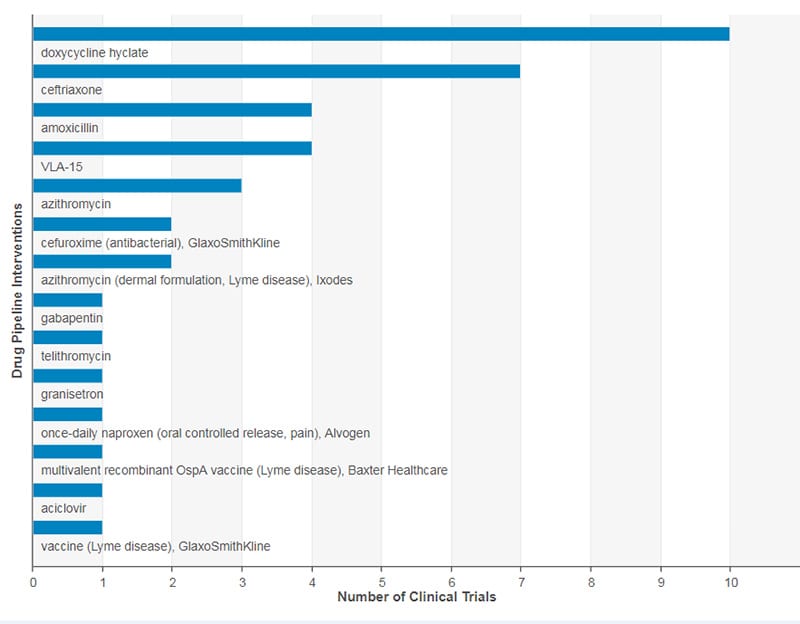 Treatment outcomes may be improved by the use of individualized therapy

While antibiotics remain the standard of care for Lyme patients, data from the MyLymeData registry showed that only 51% of antibiotic-treated cases report some improvement after a year, with 34% classified as high responders to treatment. An alarming 37% of patients complain that their condition was unchanged while 12% reported their condition as worse (Johnson 2018).

Current treatment options for Lyme in the U.S. are underutilized and appear insufficient, as mirrored by our real-world data analysis of Dapsone and antibiotic use. It is unclear whether the low usage of Dapsone is an indicator of the ineffectiveness of this intervention. The Centers for Disease Control and Prevention (CDC) have warned that in the absence of better therapies, up to 1 million new cases of Lyme disease may be reported globally each year.

Our analysis based on data from the Incidence and Prevalence Database™, Cortellis Clinical Trials Intelligence™ and our Real World Data Product highlights the current unmet need for precision medicine in Lyme disease, both in the U.S. and worldwide. At the same time, real-world evidence  and patient registry observational studies can complement randomized controlled trials to determine the optimal approach to generate high treatment response.

A list of therapies with codes is available here.