This article was first published in World Trademark Review on July 3, 2020.

Didi and Coupang have largest portfolios while Airbnb has the greatest geographic scope. On average it took just under two years for disruptors to file their first marks. Analysis reveals the top 50 are fast acting when it comes to IP protection.

CNBC has just released its eighth annual Disruptor 50 list, which identifies the private companies “whose breakthroughs are influencing business and market competition at an accelerated pace.” The start-ups on the list are mainly tech heavyweights with strong financial backing, and 36 of the disruptors are at – or have surpassed – the $1 billion valuation mark.

Given that these are the start-ups with some of the greatest promise, it is worth exploring how intellectual property has factored into their growing businesses. Positively, our analysis shows that disruptors have not only been quick to protect their intangibles, they have also developed fairly robust trademark portfolios in the relatively small amount of time that they have been active.

A total of 50 companies were considered for this analysis, 42 of which are headquartered in North America (the United States accounting for 40 of these), with seven in the Middle East and Asia, and one in Europe (based in Sweden). The start-ups, on average, are about eight years of age, with the oldest founded in 2005 and the youngest in 2016 (see table below; companies are listed as they are ranked by CNBC).

The first thing that stands out is the sheer number of businesses that have sought trademark protection. Convoy, a Seattle-based trucking software company, is the only one without a registered mark. According to CompuMark™ director of custom and managed solutions Robert Reading, the start-up had applied for a U.S. application for the term ‘Convoy’ in 2015 but it was opposed and ultimately abandoned.

Looking at the top 50 data set as a whole shows that the average portfolio has 276 trademarks. However, this number is skewed by a small number of companies filing large volumes of marks (see graph below). Excluding Didi and Coupang gives an average of 106.5 trademarks per entity. The average portfolio size for disruptors located in the United States is 89 trademarks.

It is worth noting that a vast majority of the two outliers’ portfolios are protected in their home jurisdictions. Of Didi’s 6,128 trademarks, 5,658 are filed in China, while 1,951 of Coupang’s 2,409 are filed in South Korea. The latter, which has been dubbed the Amazon of South Korea, interestingly owns trademarks for COUPANG ONE CLICK and COUPANG PRIME, says Reading. 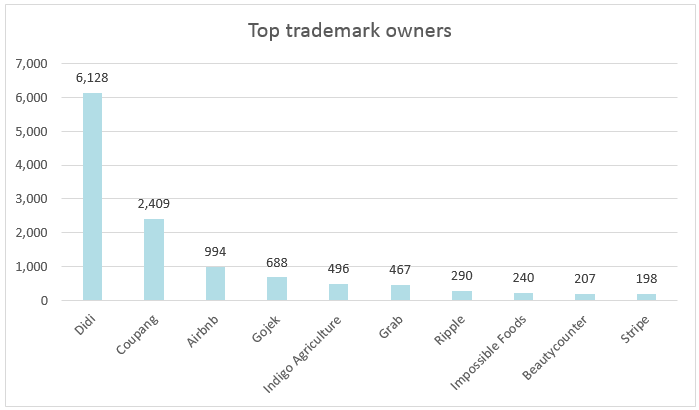 Aside from taking the time to lay down the foundations of their trademark portfolios, this year’s disruptors are also shown to be cognizant of obtaining far-reaching geographic protections. On average, the top 50 have filed trademarks in 13 registers. Airbnb has the most diverse portfolio, which is not surprising given its international operations (see graph below). Rounding out the top three are Didi and Stripe, which filed marks in 66 and 63 registers, respectively. It is worth noting that applications filed via the Madrid Protocol are counted as one register. 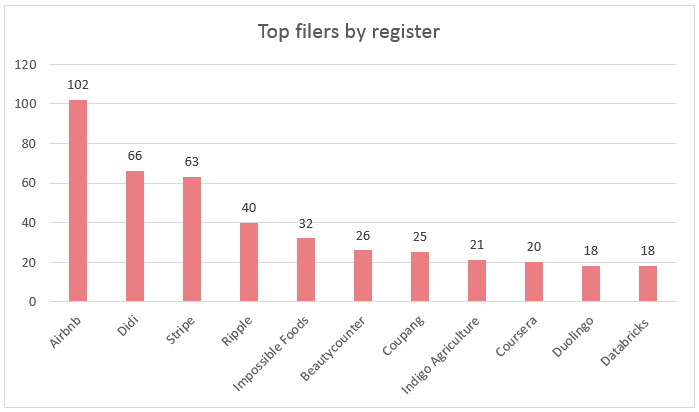 The United States was the top register for 34 of the 49 start-ups studied. Typically, companies sought the most protection in their home countries, but that was not always the case. Two Canadian companies, Attabotics and Trulioo, filed most of their marks in India and the United States, with nine and five applications, respectively. Klarna, a fintech company based in Sweden and the only European company to feature in the list, has filed most of its marks at the EUIPO. Meanwhile, of the two Israeli companies to make the list, Healthy.io has filed most of its trademarks at the EUIPO, and Neteera’s filings are tied between its home jurisdiction and WIPO.

A significant number of the disruptors sought to protect their brands and trademarks in the very early stages of their business. Exactly 70% applied for trademark protection sometime between the year of launching and their second year in the market (see graph below). Two start-ups, Didi and CLEAR, filed their first marks before their businesses were properly founded (Didi’s in 2011 and CLEAR in 2005). On average, the companies studied took just under two years to file their first trademarks after launching. 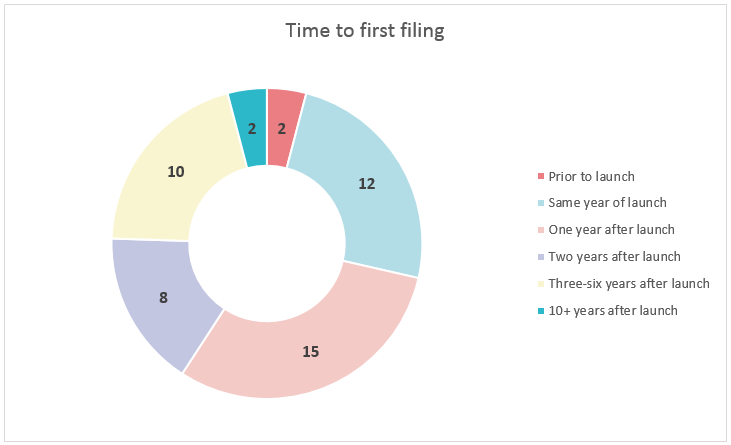 Of course, trademarks are not the only intangible that needs protecting, especially given that these disruptors are heavily tech-focused. Analysts from Derwent repeated the initial analysis to gain an understanding of the depth and breadth of the start-ups’ patent portfolios (see table below). A total of 36 of the top 50 owned at least one patent, and the average size of these portfolios amounted to 163.5 patents. It took about 2.3 years after launching for these businesses to file their first patents, which is just slightly more time than it took for the first trademarks to be filed.

This year’s disruptors are expected to have a bold impact on the market, and with such strong innovative potential it is promising to see that these brands have put in the time and money to build up their IP protections. Nearly all 50 start-ups have laid the groundwork for their trademark portfolios, and 36 the foundations for their patent holdings. The lower number of businesses seeking patent protection is not entirely surprising, as our sister platform IAM has previously reported on the small percentage of tech start-ups that take the time to develop patent portfolios of significant depth.

What is remarkable about this data is that it shows that the disruptors are not following the usual patent/trademark filing process as pointed out by Reading. Instead, most were extremely quick to secure both trademark and patent protections. It may be the nature of these businesses to be fast acting and flexible, but their filing approaches are nonetheless a positive reflection of how strong-performing start-ups feel about intellectual property.