Clarivate medtech expert Diwakar Bahuguna discusses why surgical robotics will be one of the top adaptive orthopedic technologies in the next decade. Read more.

Where the orthopedic surgical robotics market is heading

The adoption of orthopedic surgical robotic techniques has already seen a gradual shift in the past few years, with traction in large-joint replacement and spine fusion procedures. Now, with a strong patient pull for advanced technologies during procedures and with more technologies available in the orthopedic surgical robotics market, we expect the pace of robotic penetration to accelerate going forward.

Although disruption to elective procedures accompanied the financial and resource challenges in healthcare facilities from the COVID-19 pandemic, demand for new surgical robotic capital equipment has remained strong. As conditions improve globally, growth in the orthopedic surgical robotics market will likely be fueled by rising recovery of elective procedures. Moreover, as robotic technologies continue to prove their significant clinical benefits over traditional manual procedures, we expect to see increasing utilization rates for these surgical robotic systems in the future. 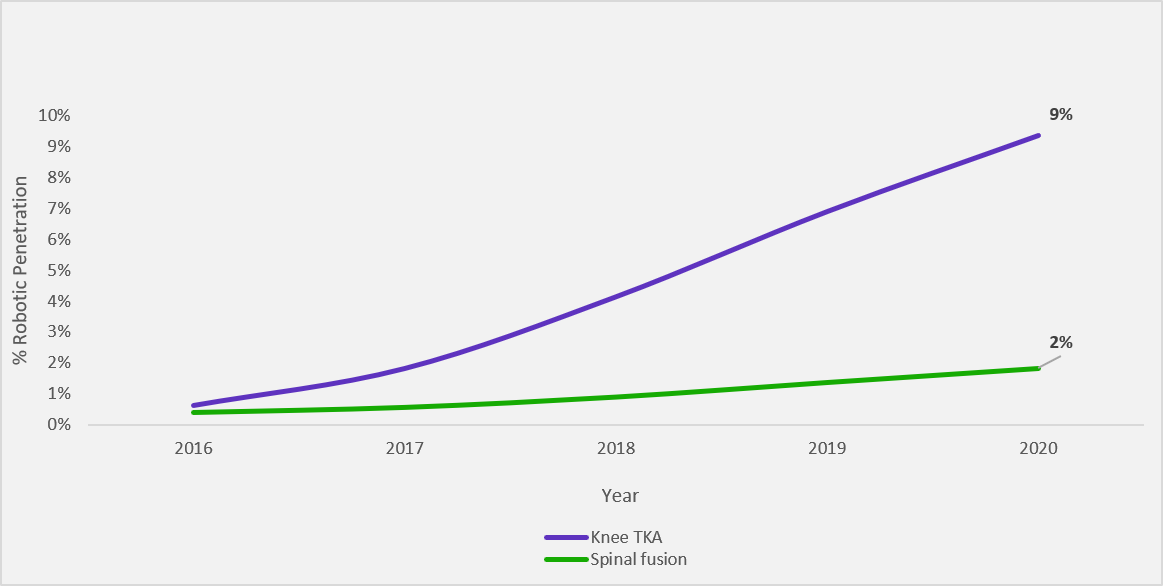 Looking at hospital inpatient penetration of robotic systems in the United States, procedure claims data show that the overall penetration of the robotic technique is still very low, which means companies offering these advanced technologies in the relatively early stages will see a significant upside opportunity.

While use of surgical robotic systems is increasing globally, adoption differs by geography. Demand for orthopedic surgical robots is the highest in the United States, but we expect that Asia Pacific countries like Mainland China, Japan, South Korea and India will see growing adoption of these systems as more competitors expand to these high-growth markets. However, the high investment costs for these systems may limit the placements of orthopedic surgical robots mostly to large hospitals in metro cities, which have fewer budget constraints and higher procedure volumes.

The large joint-replacement and spinal fusion markets are led by Stryker and Medtronic respectively. This is because MAKO Surgical (prior to its acquisition by Stryker) and Mazor Robotics (prior to its acquisition by Medtronic) were the first to commercialize orthopedic surgical robots in the large-joint replacement and spinal fusion segments. Both companies are now enjoying the synergies of having been acquired by large multinational corporations (MNCs). Given the long development timelines of orthopedic surgical robots, the first movers have been able to penetrate a significant number of facilities and establish large installed bases prior to the entry of other competitors.

However, more competitors have realized that going forward, advanced technologies like robotic systems can act as a medium to gain share in the core orthopedic implant market. Consequently, more players such as Zimmer Biomet, DePuy Synthes, and Fusion Robotics (now Accelus) have entered this space over the past couple of years to benefit from the rapidly growing and underpenetrated surgical robotics space, ultimately intensifying competition in the coming years. Below is the list of players with orthopedic surgical robots already in the market:

“A couple of other things that will be different about this [ROSA hip application] is it is a pinless application of robotics. It would be the first that we’ll see in hip. Don’t have to place these pins, basically drill into the bone of the leg to be able to have the robot know where the body is in space. So that’s going to be unique to us. The other thing that we’re going to focus on here is the application out of the gate is going to be for direct anterior approach, which we know is the fastest growth subcategory at hip right now. And it’s a challenging procedure because you don’t have great visualization, and it’s difficult as a result of that, but it’s a tough placement. We’re going to make both of those things easier through the ROSA application that we have…We think with this ROSA application, not taking more time to be able to do this, [with] the pinless application and being able to allow people to see where they can’t see and place the cup where they need to place it is going to be a big deal. That’s what we’re betting on.”

That said, in 2021, Zimmer Biomet announced its decision to spin off its comparatively slow-growth spine and dental businesses to form a new entity, which will assume ownership of the ROSA One spine system. However, the company’s ROSA One spine robotic system is not yet fully commercially available—having been FDA cleared in 2019 but not yet fully commercialized—because of Zimmer Biomet’s continued focus on the large-joint replacement space. The formal launch of this robotic system, including if and how it may be rebranded going forward, remains uncertain.

Smith & Nephew: The company’s CORI handheld robotic system, launched in 2020, has advantages like no CT/MRI required and increased workflow due to its small and portable design, making it the best fit for ASC settings. This will help the company grow as the market sees an ongoing shift towards outpatient settings.

“We’re transitioning NAVIO to CORI. And now the next phase is really to go after new customers. And some of them will of course be in ASCs, some of them will be in traditional settings. The opportunity that we have here is with CORI, we have a very versatile solution. We have a very flexible handheld and a very small footprint solution, which I think is very well suited to ASCs. Now that said, the majority of the customers will continue to be the traditional hospital. And then I think it’s just also a function of where knee replacement for the most part are still being done.”

DePuy Synthes: The company entered the orthopedic surgical robotics market with its VELYS robotic system for TKA indications in 2021, which can be used with the company’s ATTUNE total knee offering; the company will likely be able to gain share over time by leveraging its vast penetration of the knee implant market to promote its robotic system. Moreover, the company has plans to extend the robotic application to other areas and remain competitive in the orthopedic space.

“We are on track for the commercialization of our Velys robotic-assisted solution for total knee procedures in the U.S. We believe the combination of this launch along with our differentiated Velys Digital Solutions and Attune platform including some cementless offerings will enhance our portfolio and support improved performance as procedures continue to recover.”

NuVasive: The company is planning to launch its spinal surgical robotic offering by the end of 2022. The company’s X360 system for lateral single-position surgery integrated with Pulse system is a key priority for NuVasive’s imaging, navigation, and automation strategy, and the launch will help the company enter the spine robotic segment and benefit from the early adoption of robotic surgeries in spinal fusions.

“While much of our attention is focused on ensuring a successful launch of the Pulse platform, we continue to make steady progress against our Pulse Robotics timeline and our expectations for first in-human use in 2022 remain unchanged.”

Curexo and Accelus: Curexo has developed the CUVIS-spine and CUVIS-joint robotic systems, and given that it is a small player in the orthopedic surgical robotic device market, it will be well-positioned as an attractive acquisition target for orthopedic implant manufacturers that are looking to enter the market. Similarly, Fusion Robotics (now Accelus) received clearance for its spine robotic system in H1 2021, and recently merged with Integrity Implants. Together, Fusion Robotics’ compact and scalable fusion robotic system and Integrity Implant’s spinal implants will likely accelerate the adoption of their robotic system in spinal fusion procedures, which have seen lower penetration compared to large-joint replacement procedures.

Complete the form below to get in touch