Earlier this year, the Cortellis Drugs to Watch 2019 report highlighted seven drugs predicted to launch in 2019 and achieve blockbuster status by 2023. By the mid-point of the year, Zolgensma has entered the market as the most expensive drug ever launched, Skyrizi has been approved and launched in the U.S., Europe and Japan, and Zynteglo (previously LentiGlobin) has been granted EU approval.1-4

Zolgensma launches with a price tag of $2.125 million

AveXis (a Novartis subsidiary) received FDA approval in May 2019 for Zolgensma, the first and only gene therapy for the treatment of spinal muscular atrophy (SMA).5 The most common variety of SMA most often causes death in early childhood from respiratory failure. Shortly following approval, Zolgensma was made available at a record-breaking price of $2.125 million, or $425,000 annualized over five years. Considering competitor Biogen’s Spinraza comes in at $375,000 per year, but requires dosing every four months, AveXis has stated that Zolgensma, which requires only a single dose, is comparably cost effective.6

Remarkable survival results were seen with Zolgensma in the pivotal START trial in pediatric patients with type 1 SMA; 100% of patients were alive at two years, compared with the natural disease course of a 90% rate of death or permanent ventilation.7 Contrastingly, Spinraza is only effective in ~40% of patients.8 The drug is currently being evaluated for approval in Europe under an Accelerated Assessment Procedure and in Japan with accelerated Sakigake designation, with approval in both regions expected later in 2019.5 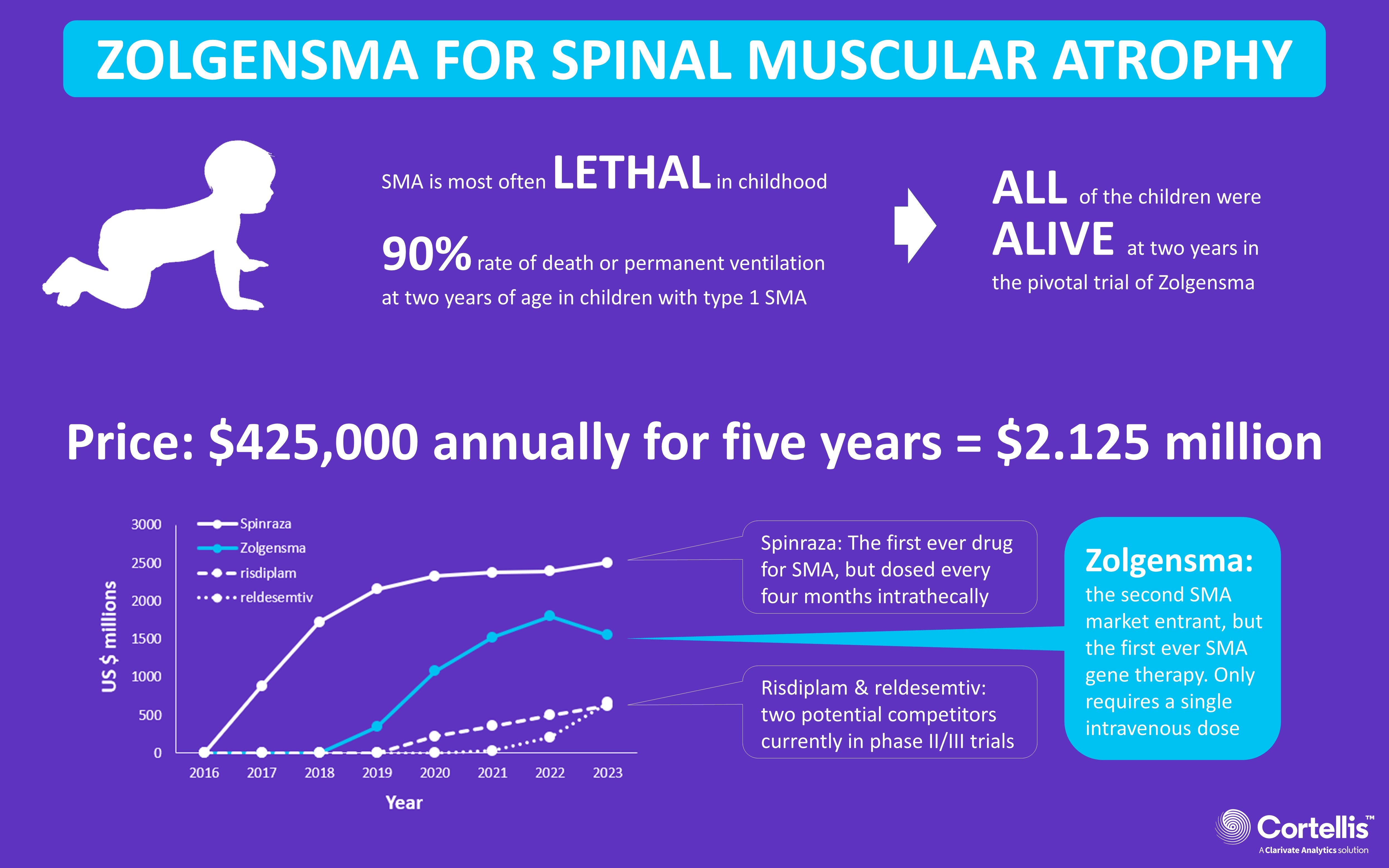 Boehringer Ingelheim and AbbVie’s Skyrizi, an injectable antibody for psoriasis, has received approval in the U.S., EU and Japan, with launches occurring in May 2019.2,3 The drug demonstrated positive results in numerous phase II/III trials, including versus Johnson & Johnson’s Stelara in ultIMMA-1 and -2, and versus AbbVie’s Humira in IMMvent.9

Although potentially more palatable alternatives exist in the form of topical treatment, light therapies and oral systemic medicines, the successful head-to-head data versus Stelara and Humira may enable Skyrizi to capture market share in the biological-therapy market space.10

Further approvals in additional indications such as Crohn’s disease, ulcerative colitis and psoriatic arthritis will be of interest to market leaders and competitors. The Cortellis Analytics™ – Drug Timeline & Success Rates (DTSR) tool forecasts Skyrizi with an 83% likelihood of approval in the U.S., EU and Japan for the treatment of Crohn’s disease. Ulcerative colitis is forecast at a 90% chance of approval in the U.S. and Japan and 82% in Europe, while for psoriatic arthritis the probability is forecast at 90% for both the U.S. and Europe. Japanese approval for psoriatic arthritis was granted alongside the approval for psoriasis. 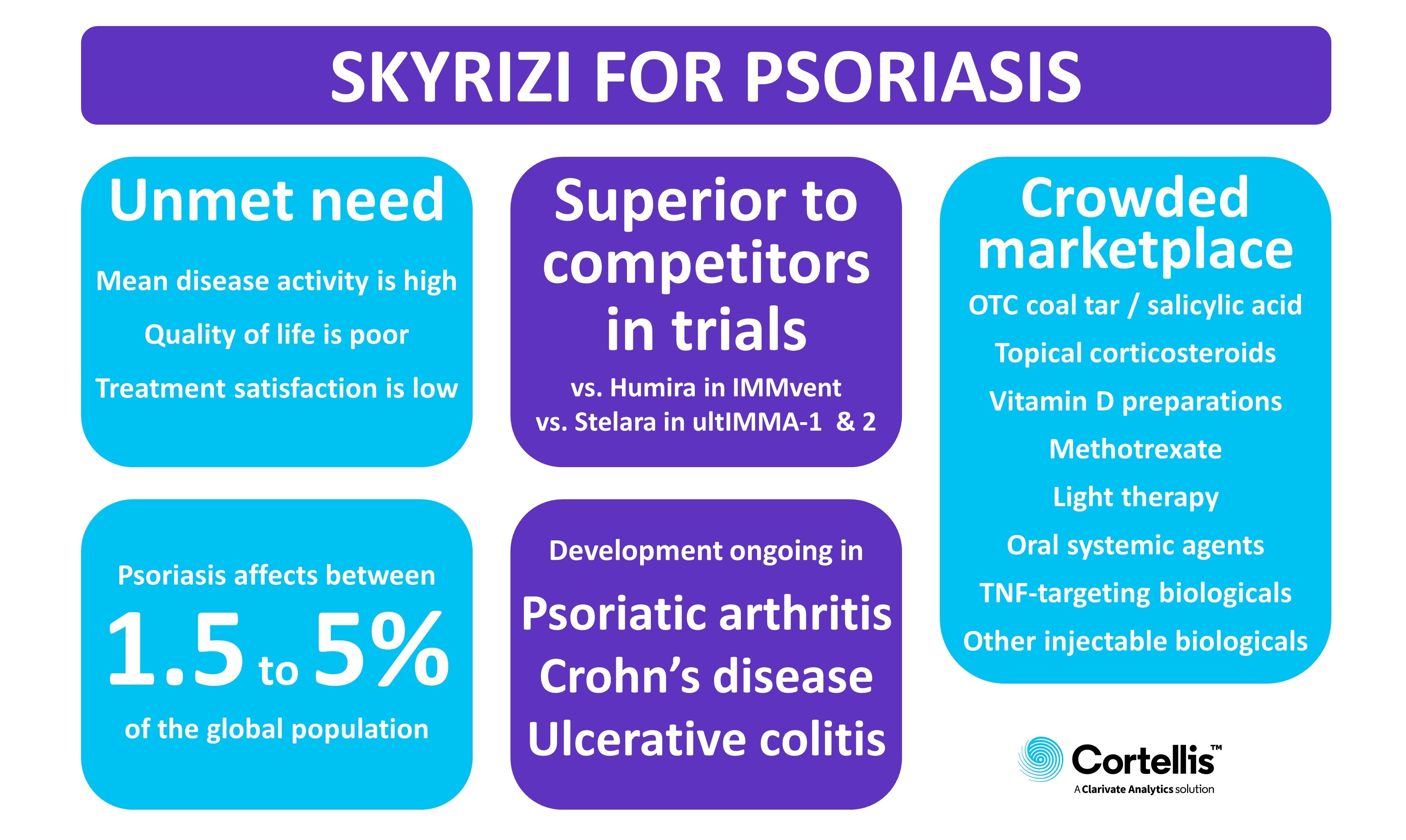 Zynteglo approved, with a potential lifetime value of over $2 million

Conditional EU approval has this month been granted to bluebird bio’s genetically modified autologous stem-cell therapy Zynteglo.4 The one-dose therapy treats transfusion-dependent beta-thalassemia, a blood disorder which causes life-threatening anemia and can necessitate regular lifelong blood transfusions.  Zynteglo was approved as part of the PRIME and Adaptive Pathway programs, and its review took just 150 days, the shortest time for an advanced therapy medicinal product by the EMA to date.11, 12

In the phase I/II HGB-204 (Northstar) and HGB-205 trials and the ongoing phase III HGB-207 (Northstar-2) study, 15 of 19 patients achieved transfusion independence after Zynteglo treatment.13 Although available sample size is small and there is a lack of late-stage data, being the first corrective gene therapy that sees lifelong transfusion dependence, with its associated risks, being converted to potentially lifelong transfusion independence should significantly drive uptake.

bluebird says that the drug offers a “lifetime intrinsic value” of over $2 million and expects the drug’s price to be announced by mid-June, with analysts predicting prices of up to $1.2 million in the U.S. and $0.9 million in the EU.14, 15 There is likely to be the option to spread payments over up to five years, with further outcomes-based models to be agreed upon.15, 16 With Orphan Drug and Breakthrough Therapy designations granted in the U.S., the company plans to file a BLA by the end of 2019.17, 18 If filed this year, the DTSR module forecasts a 95% likelihood of approval. 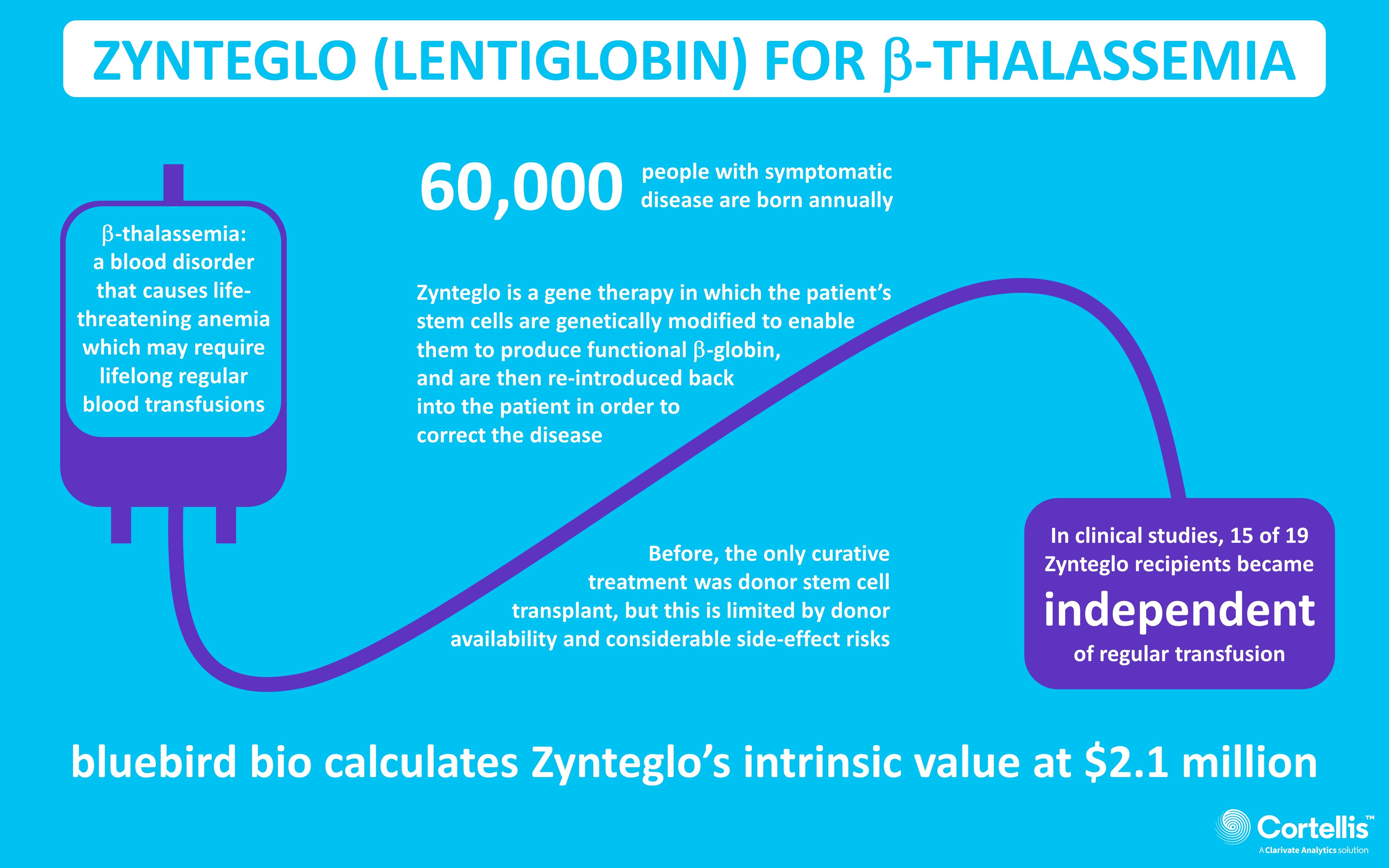 Cortellis Drugs to Watch 2019 identified seven drugs expected to launch this year with sales forecasts of $1 billion or more by 2023.19 The approvals and launches discussed above highlight the dynamic nature of the pharma industry, with new curative treatments entering for potentially fatal conditions, but also new challenges around affordability, value and pricing structure. This Drugs to Watch cohort remains a fascinating one to follow; we at Cortellis will present further analysis on these exciting therapeutics later this year.