Productivity is a perennial area of focus for HBI members, and while monitoring accounts touched per hour (or another metric) is common, most leaders do not intend for numerical goals to detract from overall quality. In fact, low quality work often requires rework, which in turn decreases productivity. While not the only solution, assisting staff with account prioritization can promote productivity while ensuring all critical tasks are addressed.

While the systems in place can apply quirks in how work queues can be created, there are basic concepts for structuring worklists that can apply to any team. The considerations below are drawn from the experiences of billing, follow-up, and denial teams, but they can be adapted for any area of the revenue cycle. 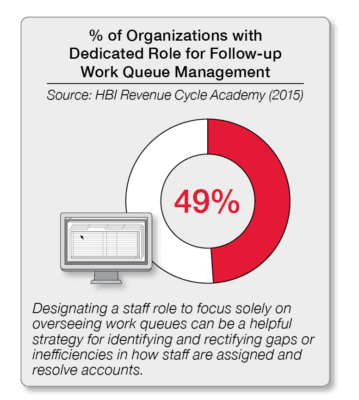 HBI data shows it is most common to specialize billers (and therefore assign accounts) based on payer. Many members describe having back-end staff dedicated to Medicare and to Blue Cross Blue Shield plans, specifically. Medicaid and self-pay accounts are also frequently mentioned as having dedicated staff. Some organizations, based on patient volume, might also have certain staff members handle certain complex but low-volume payers (e.g., worker’s compensation). Beyond those major categories, many organizations lump other commercial insurers together, perhaps breaking the group down based on patient volume, plan type (e.g., HMO, PPO), or whether certain payers have similar policies.

Another option is to consider contract status. For example, noncontracted payer accounts can be separated from those billed to contracted payers, which could allow leaders to direct potentially challenging accounts to highly skilled staff. Work lists also can be broken down by balance (e.g., high or low), service setting (e.g., outpatient or inpatient), and service line (e.g., dialysis, hospice), among other options.

Regardless of how worklists are structured at the highest level, it is likely that an alpha split is what staff members see as a primary driver of their daily workload. While an alpha split can appear arbitrary at first glance, it can be set up in a thoughtful way to ensure each range has a roughly equal percentage of accounts. One option is to base the ranges on U.S. Census Bureau data:

While a bit more cumbersome, the same data can be broken down in this way to result in nearly equal thirds:

Another option could be to use the same type of analysis on historical patient data. This could account for local variations in frequent last names or similar regional factors.

All of these considerations can be arranged in a hierarchy, if needed, to develop worklists with a manageable number of accounts and to provide prioritization guidance. For example, a Midwestern health system structures its denial and follow-up work queues first based on whether the payer is contracted. The second tier in the hierarchy organizes accounts into three groups: claims without response by the payer’s timely payment deadline, denied claims, and payment variances. The next tiers delineate by payer, plan type, and balance. The final tier is an alpha split. As an interesting side note, when accounts are organized by payer, any worker’s compensation and third-party liability claims are pulled out to be routed to dedicated staff, who handle all follow up on those accounts.

The optimal worklist structure will vary based on many factors, but by gradually narrowing focus, revenue cycle leaders can craft decision trees to guide account assignment and prioritization in a manner that will promote both high productivity and quality work.

This article was originally published on HealthcareBusinessInsights.com, now part of Clarivate.