The Web of Science Group releases its annual list of Highly Cited Researchers.

Highly Cited Researchers are among those who have demonstrated significant and broad influence reflected in their publication of multiple papers, highly cited by their peers over the course of the last decade. These highly cited papers rank in the top 1% by citations for a chosen field or fields and year in Web of Science. Of the world’s population of scientists and social scientists, the Web of Science Group’s Highly Cited Researchers are one in 1,000.

The Web of Science Group recognizes 6,216 scientists and social scientists for demonstrating significant influence among their peers through publication of multiple papers that rank in the top 1% by citations for field and year. The period surveyed in the analysis is 2008-2018.

Since UNESCO estimated the world’s population of researchers at some 7.8 million in 2015, our list calls out individuals who are far fewer than one in 1,000 with respect to contemporary citation impact.

Recognition and support of this scientific elite is an important activity for a nation or an institution in planning investments to accelerate advancement. Our Highly Cited Researchers list contributes to the identification of that small fraction of the researcher population that contributes disproportionately to extending the frontiers of knowledge and gaining for society innovations that make the world healthier, richer, more sustainable and more secure.

By comparing this year’s list to previous instalments, we note the continuing rise of Mainland China in the landscape of scientific and scholarly research. And it should be noted that our data focuses not on output but on influence at the highest level.

Three of this year’s newly minted Nobel laureates are also 2019 Highly Cited Researchers: Gregg L. Semenza (Physiology or Medicine), John B. Goodenough (Chemistry) and Esther Duflo (Economics). In all our list includes 23 Nobel laureates. Also included in this year’s list are 57 Citation Laureates; individuals recognized by the Web of Science Group, through citation analysis, as ‘of Nobel class’ and potential Nobel Prize recipients.

As always, we welcome comments and suggestions for improved identification of influential researchers. This is the second year we included Highly Cited Researchers recognized for cross-field impact. These are scientists and social scientists who achieve the same level of influence as those chosen in a specific field through their publication of highly cited papers across several fields. We introduced identification of those with multidisciplinary citation impact based on suggestions from the research community.

To see the full list of Highly Cited Researchers 2019 and read more about the selection methodology and other details, please visit:
recognition.webofsciencegroup.com/awards/highly-cited/2019/ 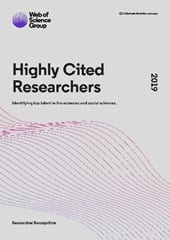 Experts from the Institute for Scientific Information provide exclusive insight into the list of Highly Cited Researchers 2019, including the methodology, country and institutional breakdowns, and much more.