Strategic planning in a post-EHR industry

For most healthcare organizations, the looming shadow of an incoming EHR implementation has become a thing of the past. In fact, according to a report by the Office of the National Coordinator (ONC) for Health Information Technology, 96% of hospitals have a federally-tested and certified EHR. This comes after years in which many organizations within the industry focused on meeting Meaningful Use benchmarks that were set in 2009 to incentivize near-ubiquity of electronic health records.

Though some experts say the era of working on the EHR is far from over, data shows a continued move away from EHR implementation and a growing focus on IT strategy as a whole. Many hospitals are finding themselves in what’s being called a “post-EHR” era, or a time when the EHR is no longer an active project, and instead is simply another application in the hospital’s toolbox. These hospitals must now look to the future and ask; what’s next? 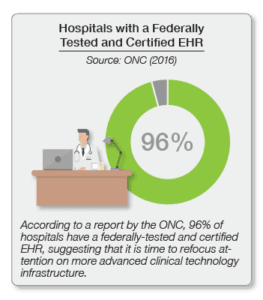 For most health systems, the primary focus in the post-EHR era will be to view the EHR as the foundation to support further opportunities that will help the organizations see a satisfactory return on their investment into the EHR. Fortunately, having an EHR platform opens the door to many opportunities for a healthcare system that were previously unattainable, such as analytics, population health, IT strategy, and improvements to the EHR itself.

Additionally, even among healthcare organizations that have previously implemented an EHR, several still lack the ability to easily and securely share patient medical records with other healthcare providers. In fact, despite 96% of hospitals having an EHR, the ONC found that only 82% of hospitals exchange patient medical records with providers outside of their own organizations. For many health systems, a sensible next step may be to work toward a greater level of interoperability between organizations’ disparate systems to allow for exchange of electronic patient records on a larger scale.

Another approach going forward is to focus on using the data collected from EHRs to analyze and address population health management. By analyzing this wealth of data, healthcare systems can work to identify health trends in a community to not only better understand the population but also to intervene and perhaps even prevent the spread of contagious illnesses and encourage healthier habits.

This shift in focus from reaction to prevention is known as proactive care, or the practice of detecting early warning signs for illnesses in patients and populations and intervening with preventative treatment. In one successful example of an organization switching to proactive care, a large, East Coast pediatric medical center utilized multiple advanced analytics tools to identify early warning signs, thereby reducing readmissions, length of stay, and overall costs. Specifically, the organization was able to see a savings of $150,000 in six months by using these predictive analytics on appendicitis alone.

Of course, opportunities in interoperability, population health, and other areas of healthcare IT strategy will present their own challenges. Fortunately, hospitals and health systems in the post-EHR era are generally better off than those still working to set up and manage their EHR, as they can take advantage of the added connectivity, organization, and ease of access contributing to a higher quality of care and workflow. The day-to-day tasks of providers today is already much more streamlined and user-friendly than it was in 2009, and future tools and additions to the EHRs will continue to improve the workflows of providers.

Organizations in the post-EHR era must now start shifting focus to discovering and acting on the new opportunities presented as a result of implementing an EHR. The journey to better care and more effective application management is one without end. Because the adoption and utilization of technology in the healthcare industry is still a rapidly growing and important field, it is important for healthcare organizations to keep the momentum going by continually improving applications and security for the benefit of the organization and community as a whole.

This article was originally published on HealthcareBusinessInsights.com, now part of Clarivate.