The Journal Citation Reports (JCR), published by Clarivate Analytics since 1975, is well-known as a unique source of information about the impact and influence of scholarly journals. In particular, the annual release of journal Impact Factors is eagerly awaited by publishers, editors, librarians, and authors seeking to know how particular journals are ranked in comparison to others of similar content. Although the Clarivate Analytics Impact Factor has garnered this very particular attention, other data in the JCR are also important in understanding the unique patterns of citations within and between journals. Each journal record in the JCR contains a Cited Journal list: a tabulation of all citations to the journal from any article indexed during the JCR data year. An examination of the Cited Journal list for most titles will contain data counting citations from the journal to itself, i.e., instances in which an article published in a journal has cited a previously published article in that same journal. These references are often called “self-citations.” In this study, we examine data from the 2002 Journal Citation Reports — Science Edition, to identify the magnitude, the characteristics by category, and the influence on journal performance metrics of self-citation.

We found that self-citation rate shows only a weak correlation with the impact and subject of a journal. There is also a weak correlation between self-citation rate and the size or specificity of the category (categories) assigned to a journal. Self-citation appears to be a characteristic largely at the level of the individual title, and must be considered only in the context of the title’s particular content and history. The removal of self-citations from Impact Factor calculation had little effect on the relative rank of high impact journals. Some journals with lower Impact Factors and rank in category did show more dependence on the contribution of self-citations, but only a small proportion of journals show significant changes in quartile rank following the removal of self-citations. Impact Factor and other performance metrics can provide important information about the role of a journal in the scholarly literature; however, the value and use of these metrics is improved by understanding the underlying data.

Introduction: The use and meaning of self-citation

The Cited Journal lists in JCR often reveal that each journal is one of its own most frequently cited sources. A high volume of self-citation is not unusual or unwarranted in journals that are leaders in a field because of the consistently high quality of the papers they publish, and/or because of the uniqueness or novelty of their subject matter. Ideally, authors reference the prior publications that are most relevant to their current results, independently of the source journal in which the work was published. However, there are journals where the observed rate of self-citation is a dominant influence in the total level of citation. For these journals, self-citation has the potential to distort the true role of the title as a participant in the literature of its subject. 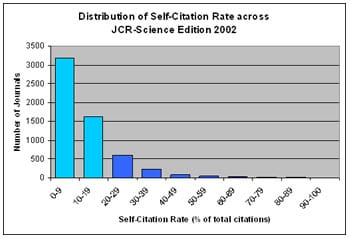 Figure 1: Histogram of Self-Citation Rates for the 5,876 journals in the JCR-Science Edition 2002. 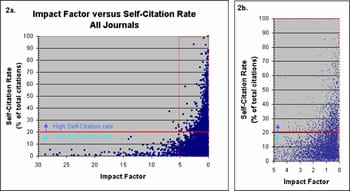 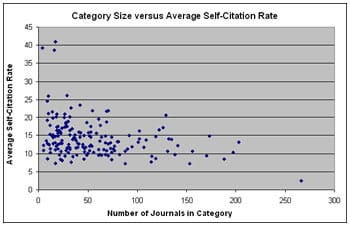 Table 1: Number of assigned categories for journals with high or low rates of self-citation

Distribution of self-citation rate within a category
To provide a context for the examination of individual journals, several categories were studied in detail. The results were generally consistent across categories; the Cell Biology category was chosen as a representative example for this study.
Within the Cell Biology category, the journals were ranked by Impact Factor. The rank was plotted against the self-citation rate (see figure 4).

Figure 4: Rank in category versus Self-Citation Rate, Cell Biology category: The different color symbols represent the population as divided into quartiles by rank 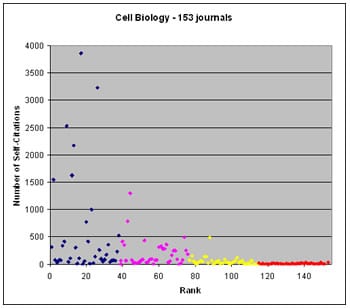 Figure 5: Rank in category versus Number of Self-Citations — Cell Biology category. The different color symbols represent the population as divided into quartiles by rank, consistent with presentation in Figure 4.

There remain individual situations, however, where a high rate of self-citation occurs in a journal with a high Impact Factor and rank in category (see Appendix A: each of the four categories represented contains one or more journals in the top quartile, ranked by Impact Factor, with a self-citation rate over 20%). These journals were examined individually to determine if they represent a specialized topic with few other journals, or if there are other reasons for the high rate of self-citation. Often, such journals are new titles and/or journals in a highly specific area of research, such as the journal Lab on a Chip, which focuses on an emerging area of technology. The journal was launched in 2001, and ranks 12th out of 119 titles in the Chemistry, Multidisciplinary category. Thirty-nine of the 131 total citations received in 2002 are self-citations. 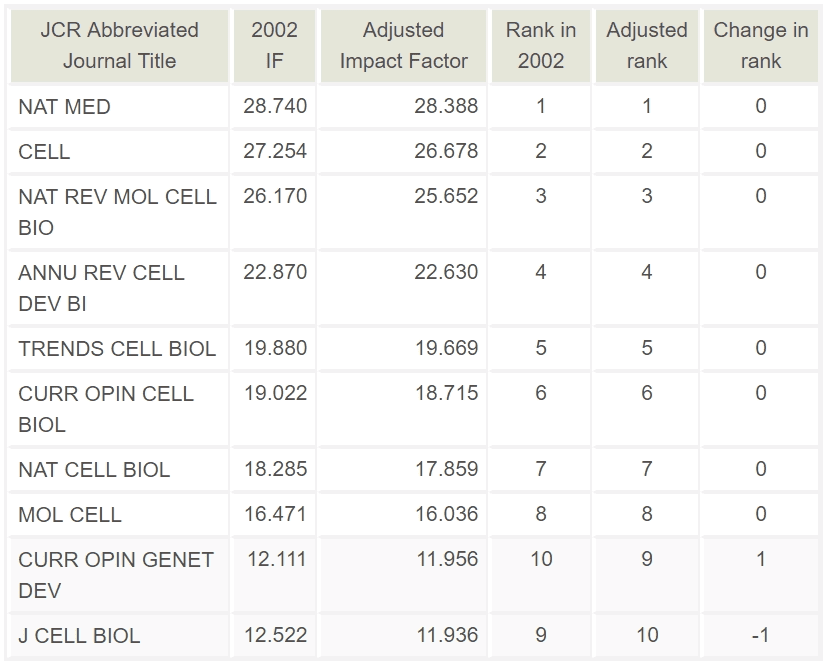 Although there are two small changes in rank among the top ten (the 9th and 10th ranked journals exchanged positions), the titles that appear on the list remain the same with or without the inclusion of self-citations in the Impact Factor calculation. The journals lower in the ranking were more affected by the removal of self-citations, but few large changes were observed. Among the 153 journals in the category, only 22 journals showed a change in rank of five or more positions. Of these, nine increased their rank by five or more positions, and thirteen decreased.

Conclusion:
Journal self-citation is a known aspect of referencing practice. Nearly every journal in the JCR-Science Edition in 2002 contains at least some reference to its own, previous literature. Examining the entire population of journals in the JCR-Science Edition, we can establish a criterion for an expected level of journal self-citation. Here we determine that a self-citation rate of 20% or less is characteristic of the majority of the high-quality science journals selected for coverage in Clarivate Analytics products.

A relatively high self-citation rate can be due to several factors. It may arise from a journal’s having a novel or highly specific topic for which it provides a unique publication venue. A high self-citation rate may also result from the journal having few incoming citations from other sources. Journal self-citation might also be affected by sociological factors in the practice of citation. Researchers will cite journals of which they are most aware; this is roughly the same population of journals to which they will consider sending their own papers for review and publication. It is also possible that self-citation derives from an editorial practice of the journal, resulting in a distorted view of the journal’s participation in the literature. The consideration of self-citation can reveal journals with an excessive reliance on self-citation, unexplainable by any other characteristic of the journal.

For the majority of journals, low and moderate levels of self-citation are an expected part of their interaction with the literature. We studied the effect of self-citation on Impact Factor and ranking of journals in the Cell Biology category and found that there is little change to the relative rank of the top ten journals when self-citations are removed from consideration.

Citation represents a connection between two published articles. It is an article-level interaction. Ideally, authors will choose the most relevant works to cite, independently of the journal in which they were published. The JCR contains citations aggregated at the journal-level, and, while they do not show article-by-article practices, they can reveal cases where journal performance is distorted by a high rate of self-citation. Although it is not addressed in the current work, examination of a journal’s pattern of outgoing citation (derived from the Citing Journal data in the JCR) could also reveal a biased citation practice at the journal level. Cited Journal data are collected for each title from across the entire Clarivate Analytics Citation Database. A journal cannot directly affect the degree to which it is cited by other titles and so cannot affect its Cited Journal statistics. Citing Journal data, in contrast, are derived from material published in the title, and therefore can be revealing of a journal-level practice of self-citation.

The current study was based on the analysis of a single citing year of data. Because citation is a dynamic and on-going phenomenon, no one year of citation data is sufficient to define the self-citation practice of an individual journal. Several consecutive years of citation patterns are necessary to establish whether a journal is actively participating in the scientific communications in its field, or if it is relying primarily on self-citations for impact. Further, this study was limited to the JCR — Science Edition. Citation practices in social sciences differ from those in science, and were not included in this study.

The Cited Journal data in the JCR have always contained information on journal self-citation. In 2004, a new interface to the JCR on the Web® will present the cited and citing journal data graphically, and will specifically include display of journal self-citations and their contribution to the key citation metrics of Immediacy Index, Impact Factor and total citations. As journal self-citation data become accessible even to casual users of the JCR, it is important to understand these data in the context of citation practices throughout the population of journals in the Clarivate Analytics Citation Databases.

This essay was prepared by Marie E. McVeigh, Clarivate Analytics. Special thanks to James Testa, Maureen Handel, and Henry Small for their critical reading of the manuscript and many helpful comments.

Appendix A: Other example categories