Understand the key drivers and trends of Q4 2019 biopharma business development activities, and get a preview of what’s in store for Q1 2020.

Total disclosed biopharma mergers and acquisitions (M&A) value increased in the fourth quarter of 2019. Disclosed deal value of the top 10 biopharma M&As increased by 47% to $24.9 billion from $16.9 billion in Q4 2018. Licenses were also in abundance with the top 10 licensing deals in Q4 of 2019 having a disclosed deal value of $17.1 billion, a decrease of 22% from $22 billion in the same quarter of 2018. Additional insights on key activities are included below.

In addition, Astellas acquired U.S.-based firms Audentes and Xyphos (an AvidBiotics spin-off) for $3 billion ($60 per share) and $665 million (including $120 million in upfront fee), respectively, reinforcing its genetic regulation and immune-oncology portfolios. Merck & Co. offered $2.7 billion ($20 per share) in exchange for oncology firm ArQule, with advanced clinical AKT inhibitors for multiple cancers, including miransertib (phase I/II) and ARQ-751 (phase I), as well as BTK inhibitor ARQ-531 (phase I).

Roche moved its interest in autoimmune diseases with the offer of $1.39 billion (including an upfront of $390 million and $1 billion in milestone fees) for Promedior. Finally, Alexion acquired Achillion, granting access to multiple clinical candidates, including ACH-4471 (danicopan), an oral first-generation factor D inhibitor in phase II for paroxysmal nocturnal hemoglobinuria (PNH) and C3 glomerulopathy, and ACH-5228, an oral second-generation factor D inhibitor in phase I for complement mediated diseases, including PNH. 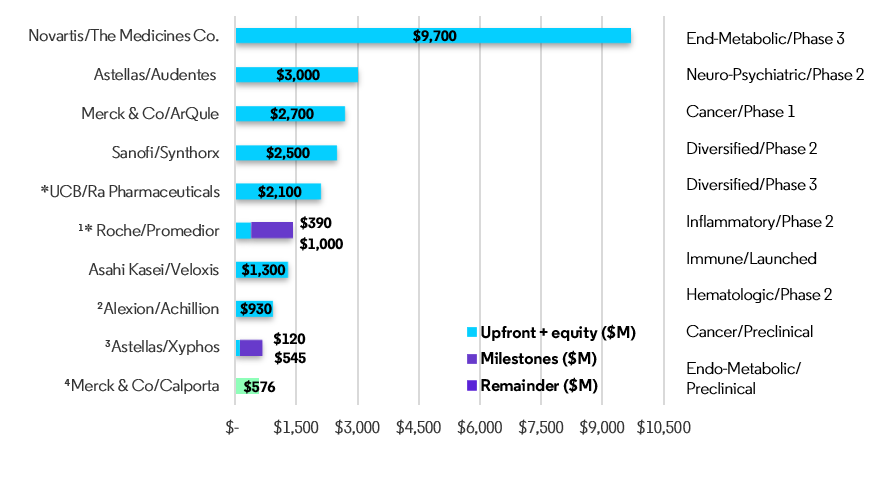 Japanese firms showed preeminent M&A activity in the Asia-Pacific region during Q4 2019 (7 of the 10 firms involved in the transactions have headquarters in Japan), with an overall size of $6.7 billion. As mentioned previously, Astellas acquired Aduentes and Xyphos for $3.7 billion, and Asahi Kasei bought Veloxis Pharmaceuticals for $1.3 billion.

Leading the top 10 in total deals value was BeiGene, who attempted to expand in the Chinese oncology market by gaining territorial rights to Amgen’s antibodies blinatumomab (Blincyto) and denosumab (Xgeva) and a proteasome inhibitor (Kyprolis). Roche had the highest number of licenses in the top 10 (figure 4), acting as a buyer in two deals with separate partners, with a total projected value of $4.6 billion, 27% of the overall value of the top 10 licenses. 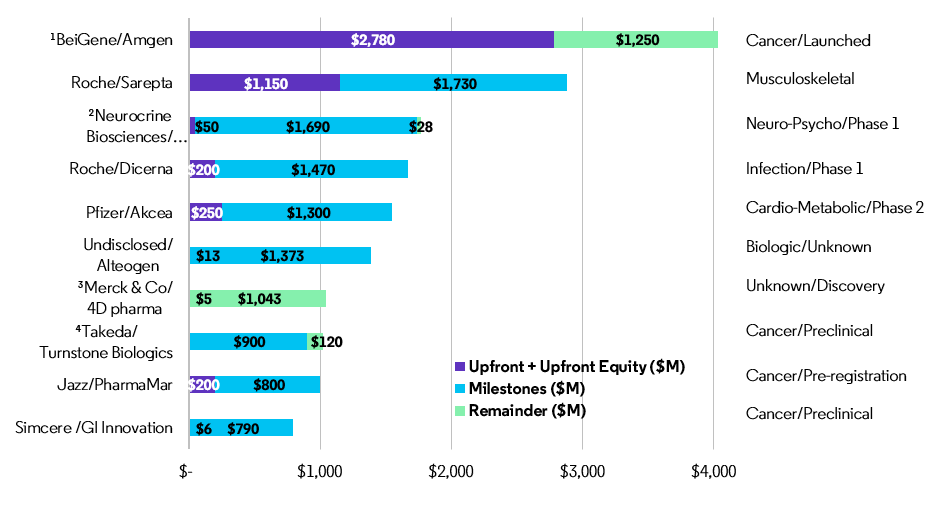 Fill out the form to the right to get the authors’ full Q4 2019 analysis, including a deeper look at key M&As, a review of target portfolios by APAC companies, plus an early outlook on Q1 2020 high-value and diversified M&As.

Complete the form to download the Q4 2019 licensing report.