Key disruptors in the multiple myeloma landscape: 2020 and beyond

Accelerated innovation in drug design and development is providing diverse treatment options for cancer patients, including hematological malignancies, like multiple myeloma. However, innovation has complicated physicians’ therapy selection and decision making, including how best to sequence treatment across lines of therapy. Thereby contributing to an unmet need for indications like multiple myeloma, that are typically associated with frequent disease relapse and recurrence. Nevertheless, the pipeline for multiple myeloma is competitive and bursting with a potential arsenal of future treatment options. There are a few novel therapies that stand out as potential game changers and disruptors through 2020 and beyond. 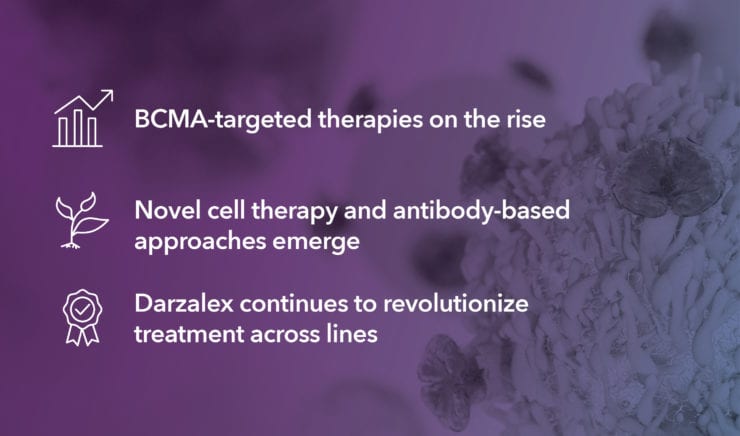 BCMA-targeted therapies on the rise

B-cell maturation antigen (BCMA), a cell-surface protein that is expressed highly on malignant plasma cells but has low expression on normal cells, is under intense research and development as a target for multiple myeloma therapies. Drug developers are pursuing novel and innovative approaches that target BCMA and disrupt its function. Broadly, these innovative approaches involve cell therapies or antibody-based therapeutics. 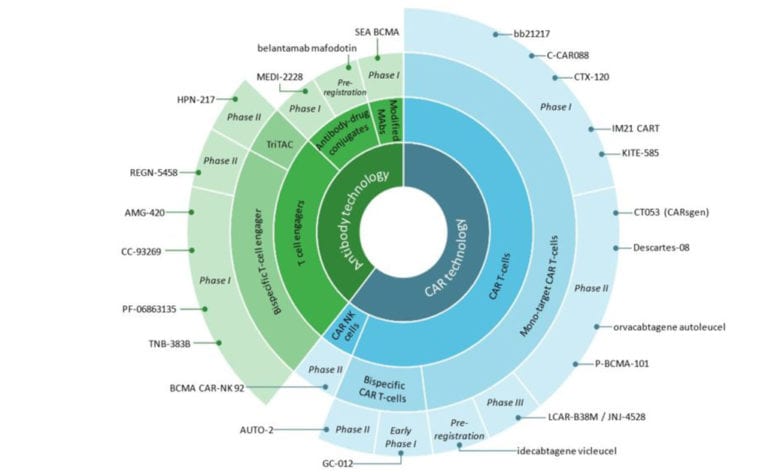 The anti-CD38 Mab Darzalex (Janssen/Genmab) was first approved as a monotherapy for the treatment of relapse or refractory (R/R) multiple myeloma patients (in 2015) and has since secured successive label expansions in this dynamic space. Darzalex-based regiments- (e.g., Darzalex combined with dexamethasone and either Revlimid, Velcade or Pomalyst/Imnovid) are now firmly entrenched in the R/R setting. Furthermore, positive data from the Phase III CANDOR trial is expected to solidify Darzalex’s label expansion as part of the triplet regimen DKd (Darzalex, Kyrpolis, and dexamethasone) in this patient population with Genmab/Janssen filing for FDA approval in February 2020.

DRG forecast that Darzalex-based regimens will become key standards of care in the commercially lucrative first-line setting over the next decade. Darzalex’s uptake and revenue opportunity will also be driven by a future approval in patients with smoldering multiple myeloma (AQUILA study), launch of the more convenient subcutaneous formulation (PERSEUS and PLEIADES studies) and use of the drug as maintenance.

Future prescribing and adoption of novel therapies for multiple myeloma will be dependent on many factors including clinical efficacy and safety, cost of therapy and patient access. Cost of therapy may impede patient access and in the United States, commercial or Medicare coverage will be pertinent to the therapies’ adoption. Over the next decade, DRG anticipates Darzalex-based regimens to dominate across treatment lines and become key standard of cares in earlier settings. Owing to these potential barriers as well as being largely restricted to late-line settings where there are fewer patients DRG forecasts BCMA-targeting approaches (CAR T-cell therapies and ADCs) to capture approximately 5% of total major market sales by 2028. However, given their anticipated premium pricing, these drug classes will garner substantially high sales figures. These novel therapies will address an important unmet need for patients who have received at least three prior lines of therapy and have limited therapeutic options remaining (particularly patients that are refractory to Darzalex).