The evolving dynamics of access and reimbursement in China

Market access and reimbursement in healthcare is a persistent problem in China despite a rapidly expanding and increasingly affluent middle class. Although about 95% of the 1.4 billion Chinese people are covered under the government’s public insurance schemes, the coverage is inadequate because of the high out-of-pocket costs for patients and poor coverage of innovative, premium-priced medicines.

What are the essential and reimbursable drugs for China?

China introduced the National Reimbursement Drug List (NRDL) in 2000 and the National Essential Drug List (NEDL) in 2009, with the intent to support universal healthcare coverage and affordable basic treatment for all citizens. The NEDL is the list of medicines in China that need to be in stock at public hospitals and clinics for treating the most common illnesses and the NRDL includes drugs reimbursable by the public insurance schemes. The latter has two categories: category A includes older, generic drugs that are reimbursed in full, a­nd category B includes costlier therapies reimbursed partially by the provincial governments with a co-pay of as low as 10%. The provinces are required to base their Provincial Reimbursement Drug Lists (PRDLs) on the NRDL, but they have historically been given the freedom to adjust the number of drugs in the category-B list by up to 15%, per local needs. However, if the recent proposal by the National Healthcare Security Administration (NHSA) to centralize the medical insurance system is implemented, the PRDLs would be effectively abolished and there would be no scope of adjustment per local needs.

What changed with the 2017 NRDL update?

Although the Ministry of Health (MoH) designed the NRDL to be updated every two years, it was updated only twice between 2000 and 2017; moreover, the coverage of therapies for diseases with a high unmet clinical need (e.g., cancer), particularly premium-priced drugs approved and reimbursed in the Western markets, was poor. However, in the third NRDL update of 2017, a secondary negotiation channel was established with the manufacturers of such therapies for price discounts in exchange for inclusion in NRDL category B. As part of this update, 32 manufacturers were invited to negotiate for discounts on 44 drugs of high clinical and commercial value, most of which had market exclusivity. Of these 44 drugs, 36 eventually passed the negotiations with an average discount of 44% and were listed on the NRDL with a patient co-pay of 10-20%. The clear majority (31/36) of these were Western drugs for various indications including cancers, rare diseases, cardiovascular diseases, and diabetes. Interestingly, another 17 anticancer drugs were added to the NRDL through the same negotiation process in 2018, 10 of which were approved after the 2017 NRDL update. With the recent announcement that the negotiations for the 2019 NRDL update of China will be undertaken in August, it seems that the MoH is finally keeping its promise of the two-year update frequency. The negotiation system has not only improved patient access for innovative, premium-priced therapies but also allowed manufacturers to expect a wider uptake of their therapies in China, which could translate into higher revenues despite the discounted pricing. 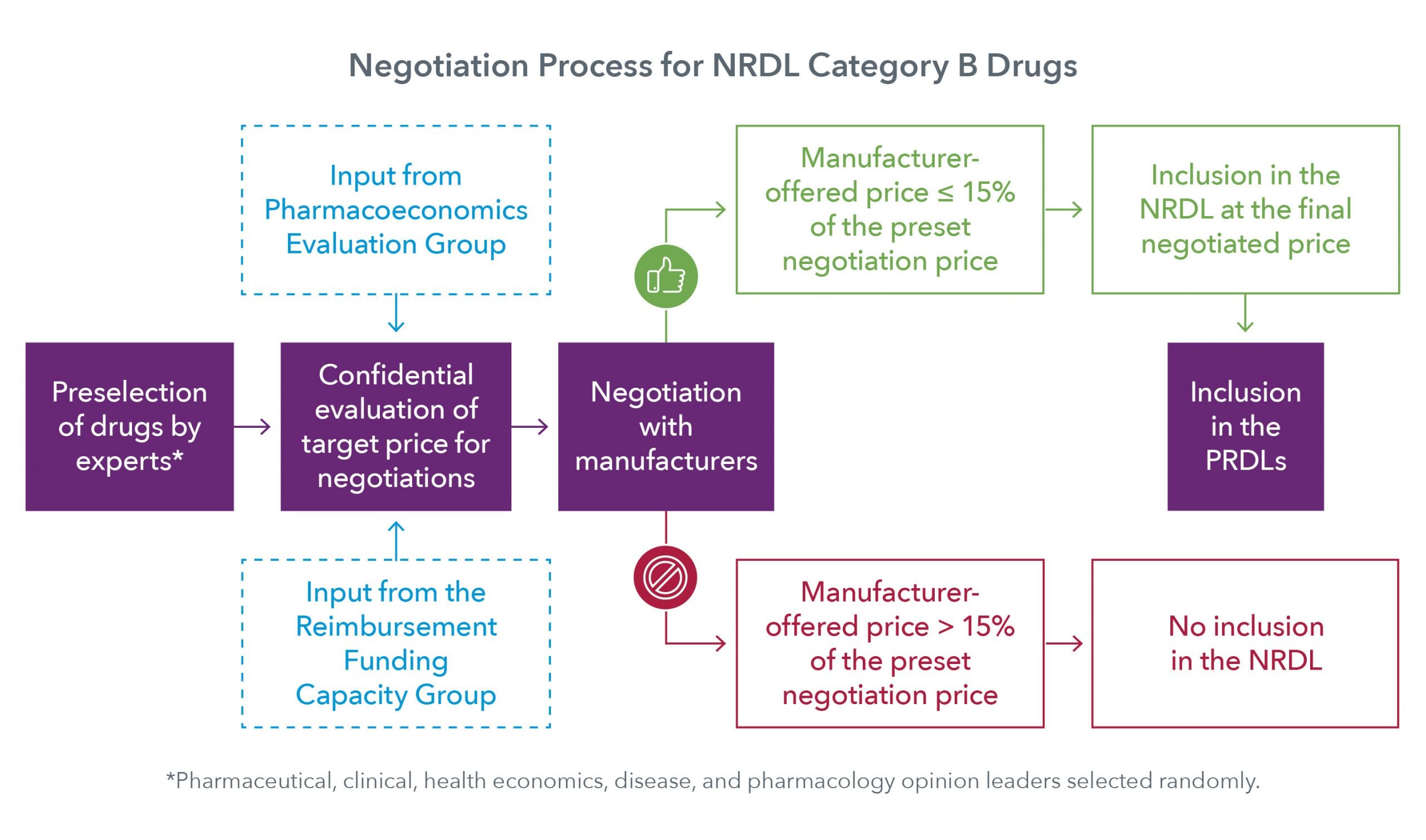 What are the shortcomings of the secondary negotiation process?

The negotiation process is being lauded by multinational manufacturers as well as China’s patient and physician community as a great initiative to improve access to innovative therapies. However, at the same time, manufacturers find the system to be closed and hard to navigate. For example, there is no formal process to apply for a drug’s inclusion in the NRDL; drugs are selected by government officials and expert advisory committees comprising physicians and pharmaeconomic experts, with no input from manufacturers. Moreover, further negotiations for the selected drugs are entertained only if the manufacturer-offered price is ≤ 15% of the undisclosed price set by the committee and leaves manufacturers with no option to renegotiate.

What can manufacturers do to ensure the NRDL inclusion of their drugs?

Manufacturers have little involvement in the selection of drugs for negotiations; however, they can work indirectly to improve their products’ prospects. In addition to a promising clinical value and addressing a high unmet need, drugs should have a potentially favourable pharmacoeconomic profile and have some degree of physician familiarity and comfort. Manufacturers must therefore engage with physicians and pharmacoeconomic experts to demonstrate the clinical benefit and cost-effectiveness of their products. They can also initiate voluntary price cuts, roll out patient assistance programs (PAPs), and offer value-based pricing to gain better penetration and visibility of their products in the market, as well as to showcase their willingness to negotiate on pricing. In a large country like China, the higher sales volume guaranteed by the price cuts can compensate for the lower profit margins.

The Chinese government is promoting private healthcare insurance by offering tax incentives to its citizens. Manufacturers can collaborate with private insurers to make sure that their products are listed on their formularies. Moreover, they can engage with local experts and opinion leaders to get their drugs listed on the provincial severe-disease insurance (SDIs) policies, which may cover as much as 70% of the cost of some high-priced, life-saving drugs often not listed on the NDRL or PRDLs. Such initiatives will allow manufacturers to have the market presence and physician trust needed for inclusion at the national level.

What should be the way forward for the NRDL update process?

China has taken remarkably effective steps in the direction of improving its access and reimbursement environment. However, further reforms are needed to make the system more transparent and navigable for manufacturers, such as establishing a formal application process with clear guidelines to file for NRDL inclusion. Such a process will allow the manufacturers to fairly showcase their drugs’ merits and the agencies to fairly assess them for inclusion or exclusion. Meanwhile, manufacturers must be more flexible and creative with their marketing strategies to claim a spot on the NRDL.