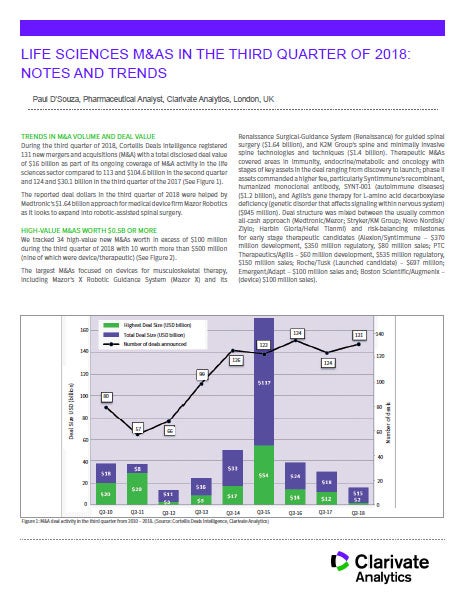 Q3 didn’t have the benefit of a mega merger to drive the dollars up, like we saw in the first half of the year, first with Cigna’s $67B bid for Express Scripts and then Takeda’s $62.3B move on Shire in the spring. Still, M&A dollars experienced a significant slowing overall, with Q3 2018 47% down in its year over year comparison.

The reported deal dollars in the third quarter of 2018 were barely helped by Medtronic’s $1.64 billion approach for medical device firm Mazor Robotics as it looks to expand into robotic-assisted spinal surgery.

We tracked 34 high-value new M&As worth in excess of $100 million during the third quarter of 2018 with 10 worth more than $500 million. Complete the form opposite to get the full report.

Complete the form below to view our report on key Q3 M&A deals: