arrow_back Back to New Web of Science Release notes

New Web of Science is the primary destination

On July 7, 2021, the new version of Web of Science became the primary destination. Since then, we’ve been collecting feedback and updating new Web of Science just about every 2 weeks with new features, fixes to issues, and improvements. The feedback has been overwhelmingly positive.

When will “classic” Web of Science no longer be available?

We are targeting January 6, 2022, to sunset the “classic” version of Web of Science.

What is available in new Web of Science?

We have migrated all core functionality to the new interface. There are a few exceptions to this, such as Email export format, which saw very little use in classic Web of Science. We continue to collect feedback to help drive future enhancements.

All registered users accounts (which contain settings, alerts, and saved marked lists) are available in new Web of Science, so there will be no loss of user’s stored information.

In addition to migrating existing functionality, we have also added new functionality that is only available in the new interface. Some of these improvements include:

Will my users be able to access the new Web of Science if my institution uses a proxy server?

Yes, access to the new Web of Science is granted to users who can currently access existing Web of Science. We recommend that institutions who use EZ Proxy should confirm that they have updated to the most current stanza.

For questions on other proxies, please view the complete information about configuring your proxy server for Web of Science.

How will usage at the new Web of Science be counted?

Availability of non-COUNTER usage reports for New Web of Science

Some reports do not need to be updated because they report on usage that is not dependent on the WoS version. The “Article Match Retrieval” and “Web Services Usage” reports continue to be accurate.

The new version of Web of Science (WoS) was released in “beta” for most customers in March 2021. At that time, the “classic” (old) version of WoS was still the default destination for WoS users, and we added a button on the home page to access the new version. Most usage continued in the classic version, with a small percentage of users navigating to try the new version. Up until March, all WURS usage reports (COUNTER and non-COUNTER reports correctly reported usage for classic WoS).

From March through July 7, 2021, most institutions defaulted to viewing the classic version, and we provided a link to navigate to the new version. On July 7 we changed the default version from classic to new WoS for most customers, meaning that when you start a WoS session you start in new WoS (not classic). Classic was still available, however, so users can navigate to it and still perform actions. During this phase, we see roughly 10% of our WoS activity still in classic WoS.

This table shows the timeline of when the two versions (“classic” and “new”) were available for most customers. Note there were a handful of early-adopter customers who gained access to the new version earlier than March 2021.

Below is a sample of a COUNTER5 DR_D1 report. The “Searches_Regular” metric (in the highlighted rows) in the COUNTER5 reports is calculated in a consistent manner across both versions across the entire timeline, and the counts shown are a sum of search activity from both versions. As such, Searches_Regular can be used for month-to-month and year-to-year usage analysis.

Below is a sample of a COUNTER5 DR_D1 report. The “Searches_Federated” metric (in the highlighted row) in the COUNTER5 reports has not changed, since the Web Services are not affected by the product version (there is no “classic” or “new” web services). As such, Searches_Federated can be used for month-to-month and year-to-year usage analysis.

Below is a sample of a COUNTER5 DR_D1 report. The “Total_Item_Investigations” metric (in the highlighted rows) in the COUNTER5 reports is calculated slightly differently in the new version of WoS. Still, the counts shown are a sum of search activity from both versions. The grand total of “Total_Item_Investigations” across all the databases is not affected, but the distribution of the activity among those databases is changing. 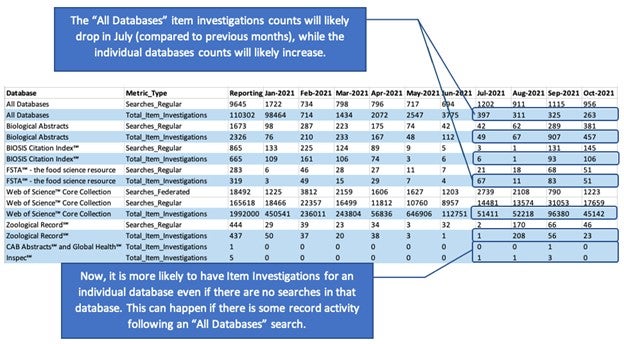 In New WoS, only Searches, Full Record Views, and Export from the summary counts toward “All Databases”, while full record export and all full text clicks are now attributed to the product database (like WoS Core Collection or Medline). We are transitioning toward attributing actions on a database record to the specific product database (rather than All Databases). Of course, the overall total events for the institution will not change, but in the product breakdown it is likely the All Databases counts for Item Investigations will drop while the databases counts (like WoS Core, Medline, etc.) will increase. The goal is to attribute all record-based activity performed in All Databases (except Searches) to the individual databases. We will work on this in 2022.

Note: On July 7 we changed the default version from classic to new Web of Science for most customers, meaning that when you open a WoS session you start in new WoS (not classic). Classic is still available, however, so users can navigate to it and still perform actions. After July 7, we have seen about 10% of our Web of Science activity is still in classic WoS. 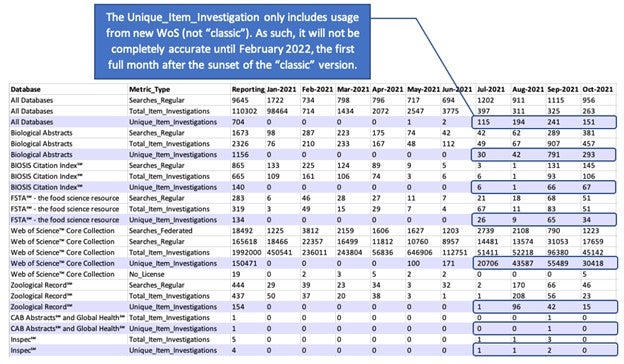 Below is a sample of a COUNTER5 DR_D2 report. The “No_License” metric is a count of the number of times a user at your institution attempted to access a record to which your institution is not entitled. This is typically a rare occurrence. For instance, it can happen if a user at your institutions is forwarded an alert email with a link to a database, edition, or year that it outside your entitlements. When the user clicks that link in that email then WoS will generate a “No License” error when it attempts to retrieve the record. Between July 7 and October 15, 2022, this error was not logged correctly in New WoS, so the counts from July to October could be lower than actual.

The Audit of COUNTER5 data collection and reporting for the new interface Web of Science started in July 2021. New Web of Science passed most tests, but failed 2 relatively minor tests due to undercounting:

How can I provide feedback? 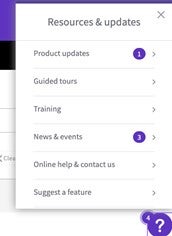 In the bottom right-hand corner of every page, you will see a purple question mark that opens the Resource Center. Simply select “Suggest a feature” and you will have an opportunity to provide feedback.