This blog post originally appeared on the Publons™ blog.

More than 860,000 people died of colorectal cancer in 2018, making it one of the world’s deadliest cancers. It’s also the third most common type of cancer worldwide, with an increasing number of young adults being diagnosed with it at an advanced stage. 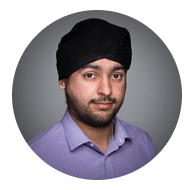 Colorectal cancer can be fatal if left untreated and so successfully predicting a patient’s risk could save an enormous number of lives. That’s where Medical Statistician, Pradeep Virdee (University of Oxford), comes in with his plans for a new prediction model using full blood count.

On December 16, 2019, Pradeep and his co-authors published their plan to identify the role of components of the full blood count in the early detection of colorectal cancer. Their findings, drawn from electronic patient health records, will be used to build a new prediction model, whereby the risk of the cancer can be identified before overt symptoms appear. (Update: this paper has now been published and can be accessed here).

Curious to learn more, we speak with Pradeep about his research, and how products like the Web of Science™, EndNote™, and the peer review training course, the Publons Academy, are helping him strengthen his methodology and achieve his research goal.

Publons: Why is the early detection of colorectal cancer important?

Pradeep Virdee: One reason many people die from colorectal cancer is because they are diagnosed at a late stage, and stage at diagnosis is heavily related to survival. Five-year survival is approximately 95% if the tumor is diagnosed at stage 1, where the cancer is confined to the colon lining, but approximately 7% at stage 4, where the cancer has spread to other organs. Detecting and treating colorectal cancer earlier can save many lives.

Can you explain the goal of your upcoming systematic review?

A number of individual studies have looked at how the full blood count, or at least one of the individual components of the full blood count such as hemoglobin or red blood cell count, is associated with colorectal cancer diagnosis. The systematic review (which is still in the early stages so I can’t say too much just yet, I’m afraid) will bring these studies together and help identify the particular components of the full blood count that can be used to identify those at high risk. The review will not only look at the results, but also critically appraise the methodology that was used to derive the result. The review will advise on the development of the new prediction model, such as the appropriate methodology to use, and therefore act as a first step to build this model.

Colorectal cancers are much more common in older patients, yet new data from Canada and the U.S. show a sharp increase among adults in their 20s and 30s. Why do you think this is happening and how might detection by full blood count change the outcome for younger patients at risk?

This is generally similar in the U.K. – more and more younger people are being diagnosed. There are a number of different factors that play a part in developing colorectal cancer, including genetics (i.e. family history), lifestyle and diet, and other conditions like diabetes put one at higher risk.

The current NHS screening program can be used to help younger patients but the main emphasis is on patients who are 55 years and older, so young people don’t really get as much out of it. The nice thing about full blood counts is that it is a simple blood test that is performed in young adults too – I myself have had a blood test a few times over the last few years or so. This means the prediction model I intend to derive can be used to identify young adults at high risk too, not just the elderly.

What are the limitations of the existing screening programs offered today?

Some of the screening programs offered today, including the fecal test and bowel scope assessments, can have a limited impact because of the age at which they’re offered, the areas covered in the examination and their general uptake by the public.  Positive screening results are then usually followed by a colonoscopy. This is considered the gold standard assessment for diagnosis, but it is invasive and not particularly liked by patients.

“A risk prediction algorithm that is able to identify cases at a much earlier stage would be of considerable benefit.”

Risk prediction algorithms for colorectal cancer do exist, and they identify who is likely to have colorectal cancer in the future by looking at the symptoms reported by patients. However, relying on the onset of symptoms isn’t ideal as these often only appear once the cancer is already at a late stage and difficult to treat. A risk prediction algorithm that is able to identify cases at a much earlier stage would be of considerable benefit.

How will the global citation database, the Web of Science, and the reference management tool EndNote help you in your research?

You completed the Publons Academy at the end of 2017. Did you find it helpful and what differences have you noticed in your reviews since completing the course?

I found the course to be really helpful and have recommended it to others in my department. I had done a couple of peer reviews prior to undertaking the course, which introduced me to the world of peer reviewing. The Publons Academy course helped me to optimize my peer review approach. For example, I became more confident in doing peer reviews after the course, given that a supervisor had approved the ones I did as part of the course. I noticed my style of writing reviewer comments had improved too.

“I often find myself asking questions about my research that I wouldn’t have thought to ask before I started peer reviewing.”

Has learning the core competencies of peer review changed the way you conduct your own research, especially from your perspective as a medical statistician?

Yes, definitely. I often find myself asking questions about my research that I wouldn’t have thought to ask before I started peer reviewing. For example, with the systematic review, one of the reasons I chose four databases as opposed to one or two is because I realized a peer reviewer could comment that using so few databases could be a limitation (as relevant papers in other databases could potentially be missed). Even when performing statistical analyses, I consider the methodology I use to make sure that I justify the decisions I make, bearing in mind that I will need to make it clear in the final paper such that peer reviewers are happy with it.

Follow the links to learn more about Publons or our free peer review training course.