Methodology: the data used in this article was provided by our CompuMark SAEGIS™ trademark database covering 200 countries and 100 million records.

The years since 2010 have seen unprecedented growth in trademark filing activity around the world. As the global economy recovered from the economic crisis of 2008, trademark applications have been filed in record numbers on major trademark registers, and nowhere has this recovery has been more spectacular than in the Asia-Pacific (APAC) region.

Trademark filing activity has increased each year since 2010 in every region of the world.

Figure 1: Annual trademark filing activity around the world since 2010 (by region) 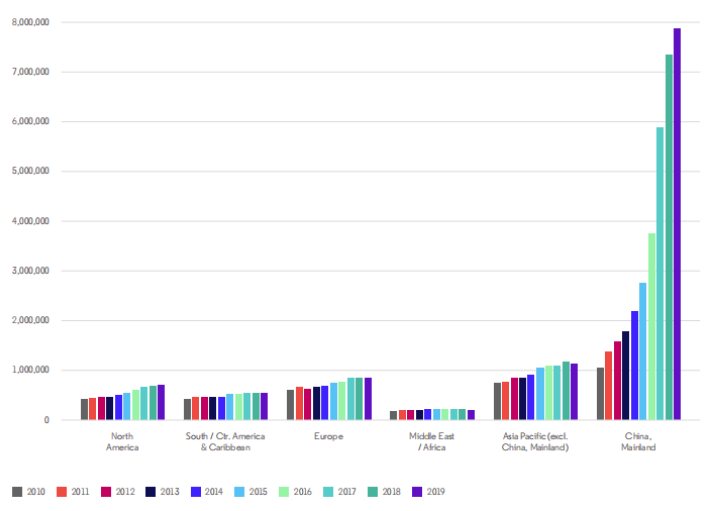 In 2019 there were over 11.3 million trademark applications filed globally – more than three times as many as at the start of the decade, and double the volume from five years earlier. 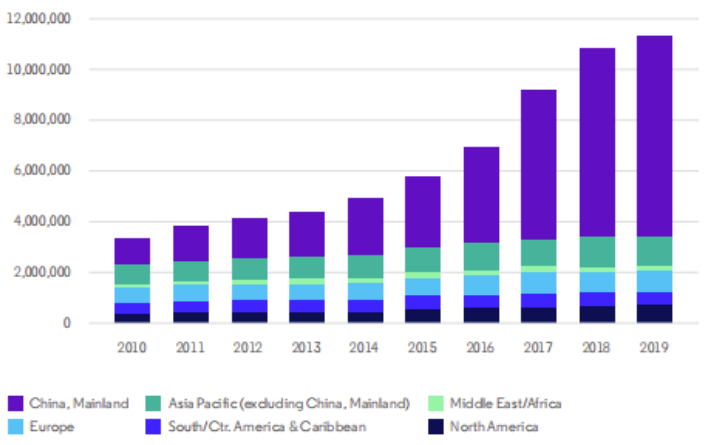 The vast majority of this remarkable growth has come from one single trademark register: Mainland China. 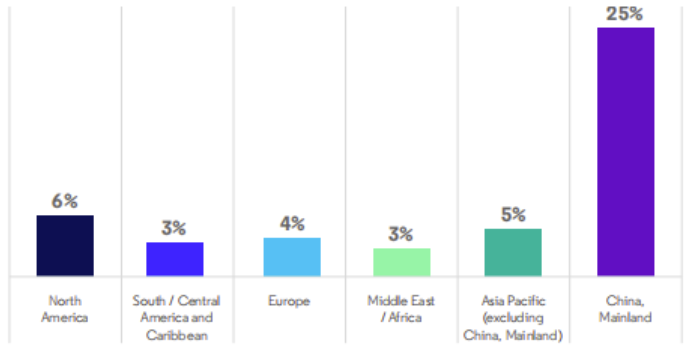 As a result of the accelerated annual growth at the Chinese trademark registry, the influence that Mainland China and the Asia-Pacific region has on global trademark activity has increased each year since 2010.

In 2010 European trademark registers (including the European Intellectual Property Office and national offices for Germany, France, Italy, United Kingdom and Spain) received 18% of the world’s trademark applications. North America (including the United States Patent and Trademark Office – the second largest trademark register in the world – Canada and Mexico) accounted for 12%. By 2019 Europe’s share had fallen from 18% to 8%, and North America’s share of worldwide filing activity had fallen from 12% to just 6%.

Figure 4: Contribution of each region to global trademark filing activity (2010 to 2019) 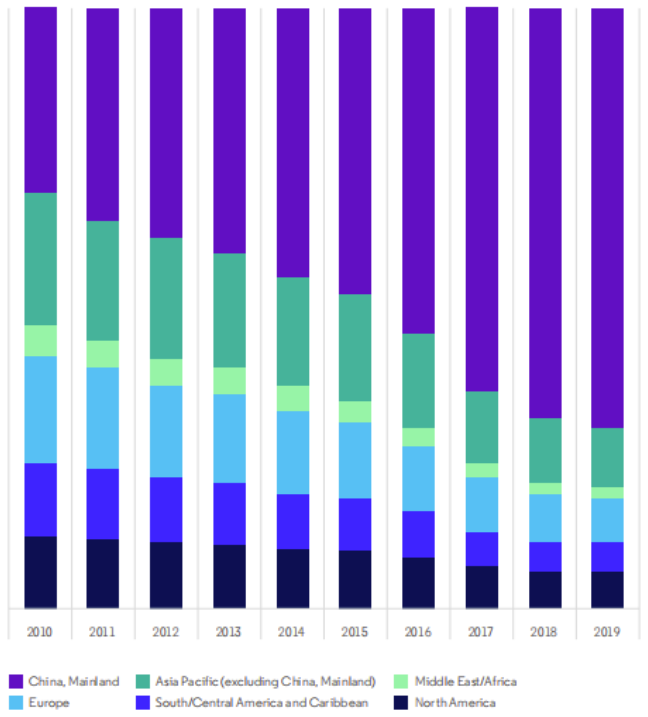 Trademark registers in the Asia-Pacific region (including Mainland China and India – the world’s third most active register) now account for 80% of trademark filing activity around the world.

Figure 5: Contribution of each region to global trademark filing activity (2010 vs. 2019) 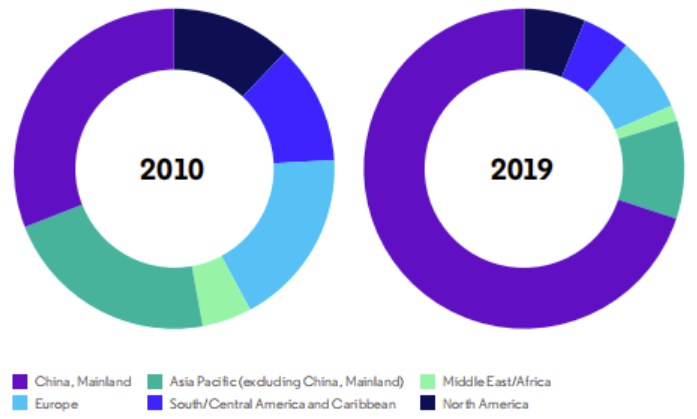 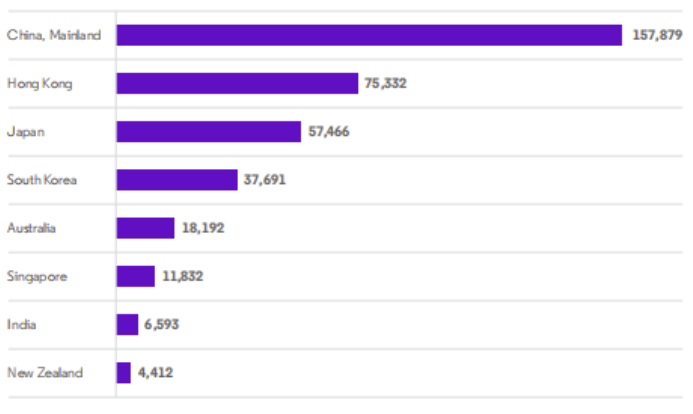 Adjusting for population, applicants from New Zealand file a relatively large number of trademark applications both on their home register and on foreign registers.

Consistent with its position as the world’s most active trademark register, Mainland China was the most popular register for applicants from all major Asia-Pacific trademark countries in 2019 with the exception of applicants from India where the United States was the favored register outside of India.

The United States and the European Union Intellectual Property Office were key foreign registers for applicants from Asia-Pacific, followed by Canada, the United Kingdom and Brazil. 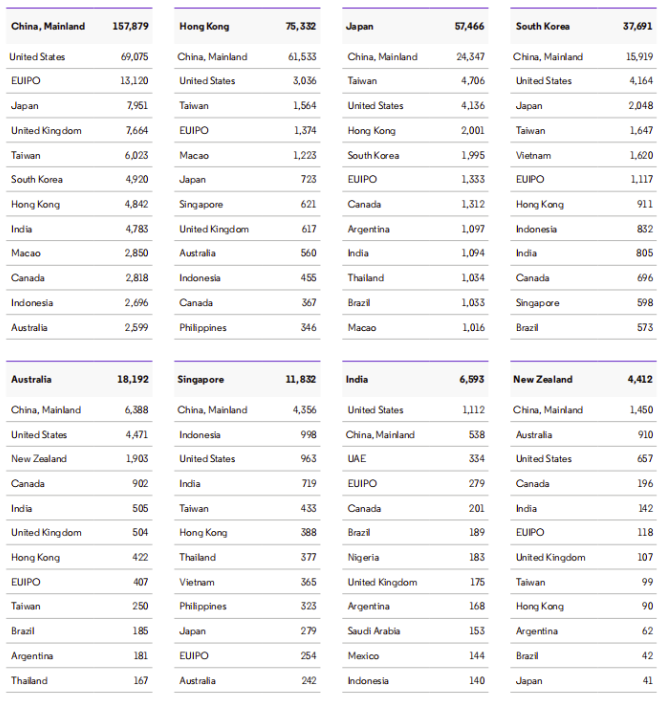 Figure 9: Use of the Madrid System for international trademarks in Asia-Pacific (2019) 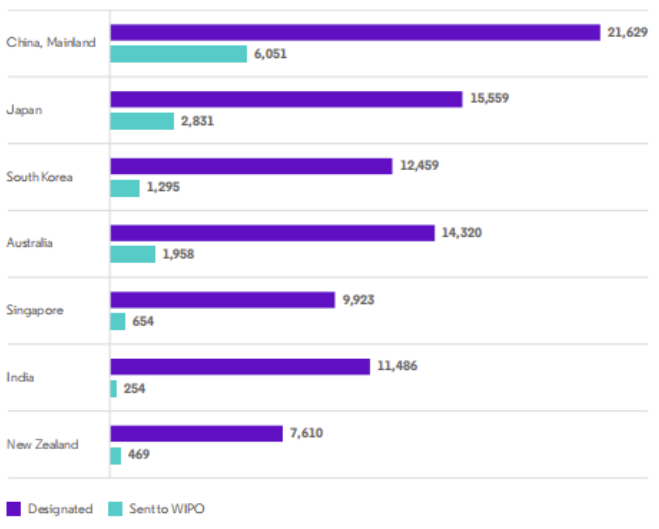 Following a number of years of strong growth – particularly in Mainland China – Asia-Pacific is now the most significant region in the world for trademark activity, both on local trademark registers and filing around the world. As they expand into international markets, Asia-Pacific brands will be challenged to maintain their growth into increasingly crowded foreign registers and protect their trademark rights in a highly competitive global economy.

Snapshot: A look into pharmaceutical class filings for trademarks in Asia-Pacific