Mainland China has seen continued rapid growth in patent filings throughout the last decade, accounting for a significant portion of global totals and driving an overall upward trend.

As shown in Figure 1, while the total Derwent World Patents Index™1 (DWPI) patent families for invention patents and utility models published in Mainland China surged to an impressive 440% in 2018 from 2010, in sharp contrast, volumes of some of the world’s other largest economies, such as the United States and Japan, remained almost constant or slightly declined.

Figure 1: Growth rate in Mainland China and other jurisdictions by year of basic publication, normalized to 2010 as baseline score of 100 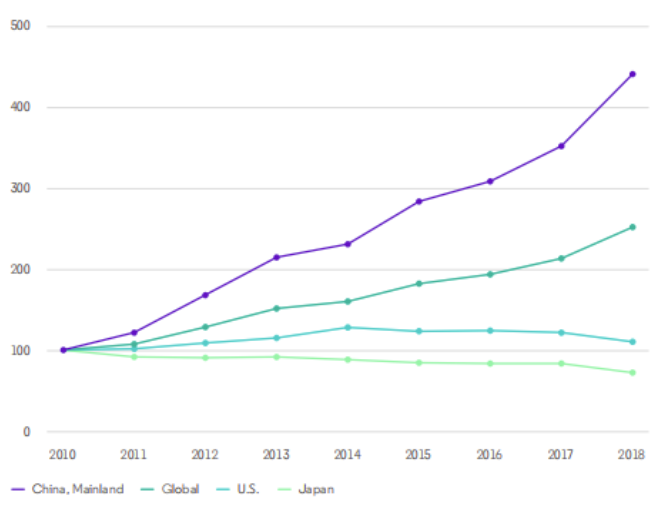 The surge of patent filings over the years in Mainland China was boosted by several factors, including national innovation strategies, growing research and development spending and incentive policies at both the state and local levels. In Mainland China’s Outline of the 12th (2011 to 2015) and 13th (2016 to 2020) Five-Year Plan for the National Economic and Social Development, “innovation” became one of the key objectives for national strategy. Specific metrics on patent filing targets were provided in various related policies.

According to data from the National Bureau of Statistics, Mainland China’s R&D spending has consistently been above 2% of its GDP for the last five years, reaching a total of 1.97 trillion Chinese Yuan in 2018.2 The patenting trend described above shows a strong linear correlation with the R&D expenditure during the same period, suggesting a positive output in the form of patent filings from innovation activities.

In the meantime, various subsidy schemes implemented at different levels across the country certainly provided additional incentives for commercial entities, universities and research institutions to rush to file patent applications. The exploding volume of patents has not gone unnoticed by authorities. It is worth noting that Mainland China has started to implement various policies to regulate patent applications and examination processes, attempting to shift the focus from pursuing ‘quantity’ to ‘quality.’ For example, patents filed by universities are increasingly evaluated by their ability to commercialize rather than by sheer volume. 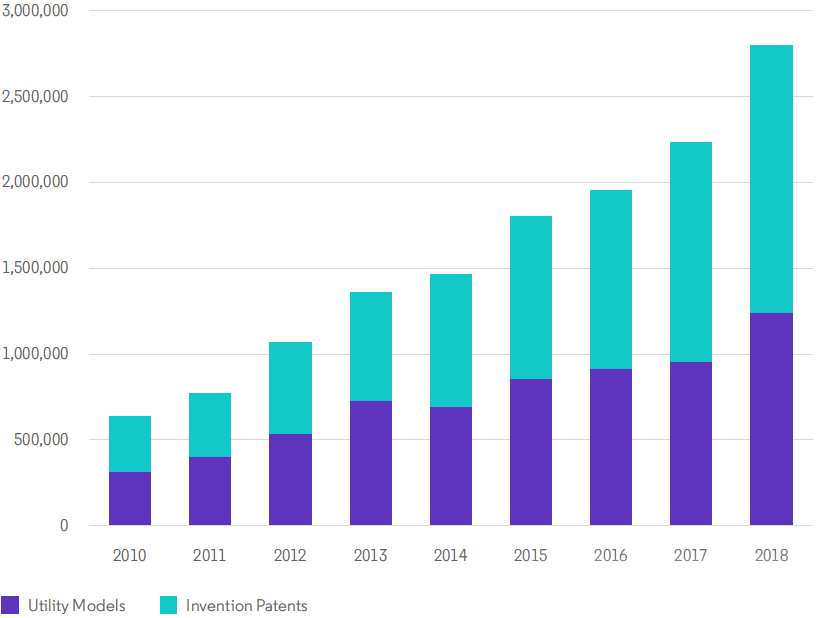 Where are the innovation sources of these patents coming from? Figure 3 compares patent publication volumes in Mainland China originating from domestic organizations where priority filings are also in China, to those where priority filing jurisdictions are foreign. It is not surprising to see filings from domestic organizations delivering a large volume each year, in fact increasing almost five-fold from 2010 to 2018. Comparatively, the volume of patents originating from foreign jurisdictions and seeking protections in Mainland China has not changed substantially, increasing by just 49% over the years. If we further break down by jurisdictions, the United States consistently ranks first, showing its continued patent activities in China.

Figure 3: Comparison of publications in Mainland China from domestic and foreign sources, counted as DWPI families when priority country is either China or foreign, by year of basic publication 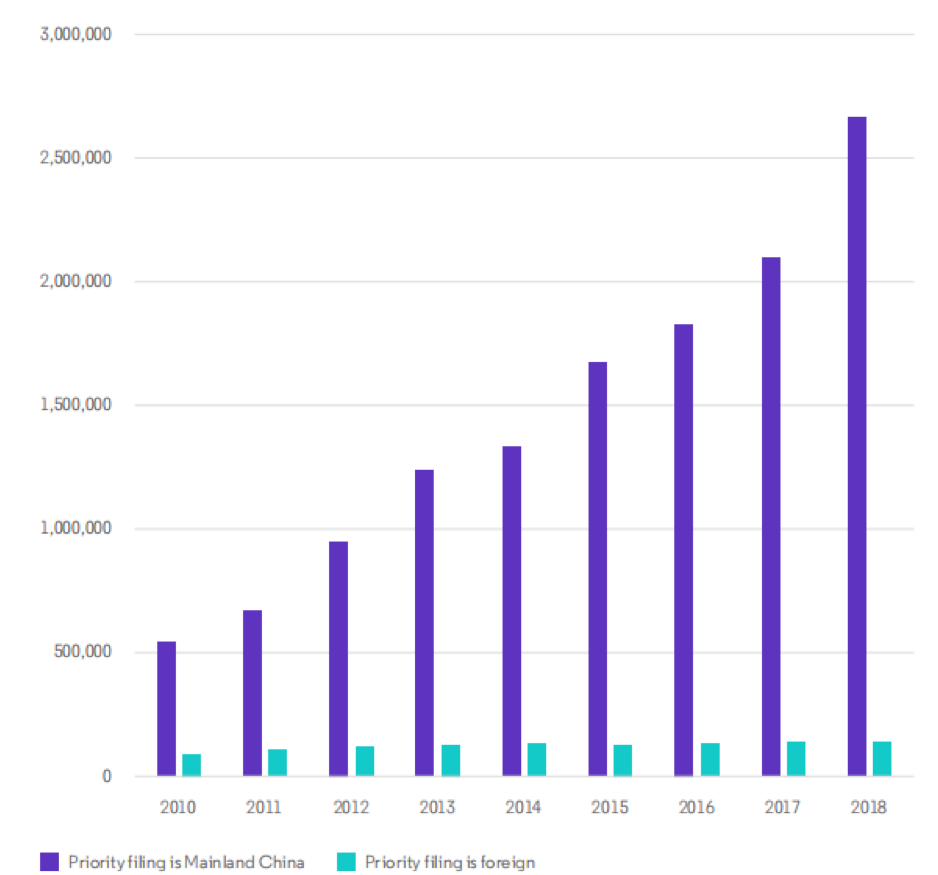 In recent years Mainland China has led technology development in many industries, especially in the information and communication technology (ICT) sector, including telecommunications and mobile internet. New technologies and applications are being developed and commercialized faster than ever before.

A study on the classification codes covered by patents published in Mainland China reflects the same focus. Figure 4 lists the leading DWPI classification codes3 ranked by publication volume in Mainland China in 2018. The DWPI classification system categorizes patent documents into three broad areas: Chemical, Engineering and Electronic and Electrical Engineering. Each of these is further divided into sections and classes which describe the technical area, or areas, covered by the patent. Digital computers (electronic data processors, interfaces and program control, mechanical digital computers) are ranked first with more than 370k published families. It is followed by industrial electrical equipment, and telephone and data transmission systems. 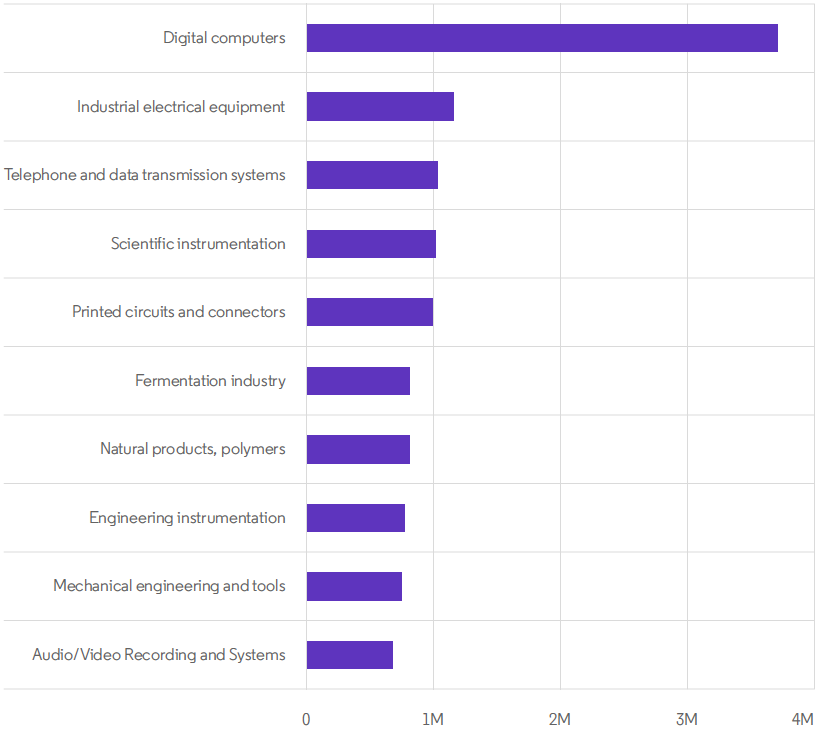 Mainland China offers exciting market opportunities and at the same time a challenging environment. Having a well-defined IP strategy in place with the understanding of the overall intellectual property landscape in Mainland China will be one of the key steps towards future success.

Download The View from Beijing: patent activity in Mainland China