Snapshot: A look into pharmaceutical class filings for trademarks in Asia-Pacific

In a report released in July 20191, the United States Agency for International Development (USAID) identified the global threat posed by influenza viruses of animal origin, particularly from Southeast Asia, which had been the source of previous outbreaks (Asian Flu 1957, Hong Kong Flu 1968, SARS 2003).

With COVID-19 dominating global headlines at the start of 2020, trademark data may provide insight to the challenges faced by the Asia-Pacific region.

Trademark activity in the pharmaceutical sector can be identified by looking at Class 5 in the Nice Classification. For applicants from a number of major Asia-Pacific countries, Class 5 is a key “export” class:

However, the overall Class 5 numbers hide a fact that may be important for future developments emanating from Southeast Asia. While Class 5 is predominantly viewed as the ’pharmaceutical’ class, it also covers other related products, such as vitamins, baby food and nutritional supplements.

The major export users filing in Class 5 from most Asia-Pacific countries are not filing for pharmaceutical products in Class 5, but for supplements and nutritional foodstuffs.

Since 2015, the leading exporters from Australia using Class 5 on trademark registers around the world are supplement/vitamin producers such as Blackmores, JBX, Max Biocare and infant milk formula company Gotop Australia.

Trademark activity strongly suggests that although the Asia-Pacific region has much to gain from investing in and commercializing novel pharmaceutical products, the current focus is on nutritional supplements. This is in direct contrast to major European countries and the United States, where pharmaceutical trademarks have dominated supplement trademarks even in recent years. 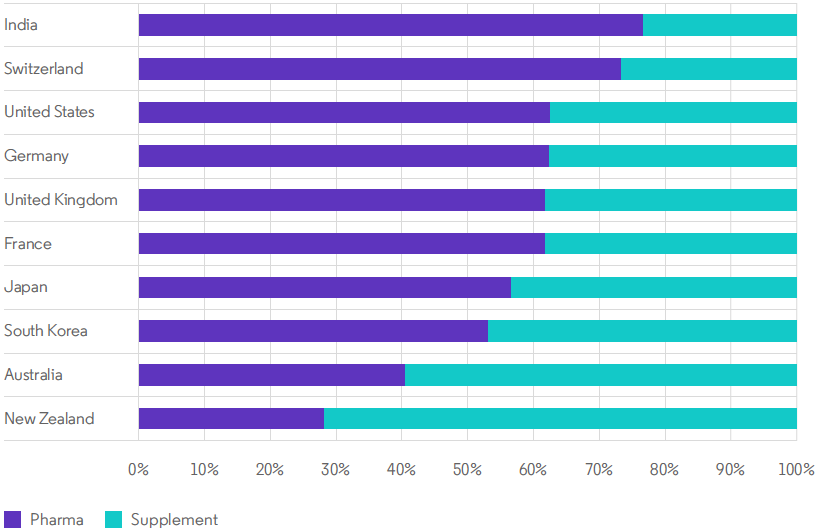 Even in the two major countries where traditional pharmaceutical companies dominate the sector, there have been challenges. In India the pharma sector has been built on a strategy of producing generic medicines cost effectively rather than through expensive R&D and investment in product innovation. And Japan has missed opportunities to commercialize research breakthroughs – for example the class of drugs known as statins were isolated by a Japanese researcher in the 1970s but never marketed, allowing U.S. based companies such as Merck and Bristol Myers Squibb to reap the benefits.

Due to difficulties with the allocation of general subclasses to Mainland Chinese trademark records, it was not possible to include the Chinese trademark register in this analysis. Mainland China has devoted unprecedented resources in recent years to providing Chinese brands a platform for global expansion. So far this has mostly involved consumer electronics, textiles, clothing and household items, but the world could benefit greatly if we see innovative Mainland Chinese pharmaceutical brands start to appear on trademark registers around the world.

Download Snapshot: A look into pharmaceutical class filings for trademarks in Asia-Pacific