Patent lawsuits involving Non-Practicing Entities (NPE), a group of actors playing a unique role in the history of the IP industry, are becoming a global matter. With the development of a Chinese IP protection system, NPEs have taken more notice of China. This paper presents the landscape of NPE litigation in China, based on exclusive data available through the Darts-ip™ database.

This report defines NPEs as: legal organizations which benefit from patent rights but do not sell or manufacture goods or provide goods-related services and take an active role in infringement litigations as plaintiffs to enforce their patent rights. Individuals and universities are not included in this data.

The statistics presented below are extracted from NPE litigation data in Mainland China, where at least one party is an NPE. The data covers a period between 2010 and 2019.1 All relevant actions involving the same parties on the same subject matter are presented as independent litigation and will be referred to as a ’case’ in the context of this paper.

For example, if Party A filed an invalidity action against Party B before the CNIPA Patent appeal board, with a subsequent appeal sent to the Beijing IP Court and finally escalated to the Supreme Court, this is still considered one case despite there being three different rulings. As long as any document in a case was made within the 2010 to 2019 timeframe2, the case will appear in the below data.

The evolution of NPE litigation in Mainland China

Figure 1 shows an undeniable, growing trend of NPE patent-related actions over time, although a few dips in the year-over-year statistics do exist. The number of cases increased significantly in 2014 and 2019. It is noteworthy that there also exists a marked increase (by 62%) of NPE litigation in Europe in 2014. That year also happens to see the first decline in patent litigation case volume in the United States.

Figure 1: Evolution of NPE litigation4 and types of action breakdown over the last decade 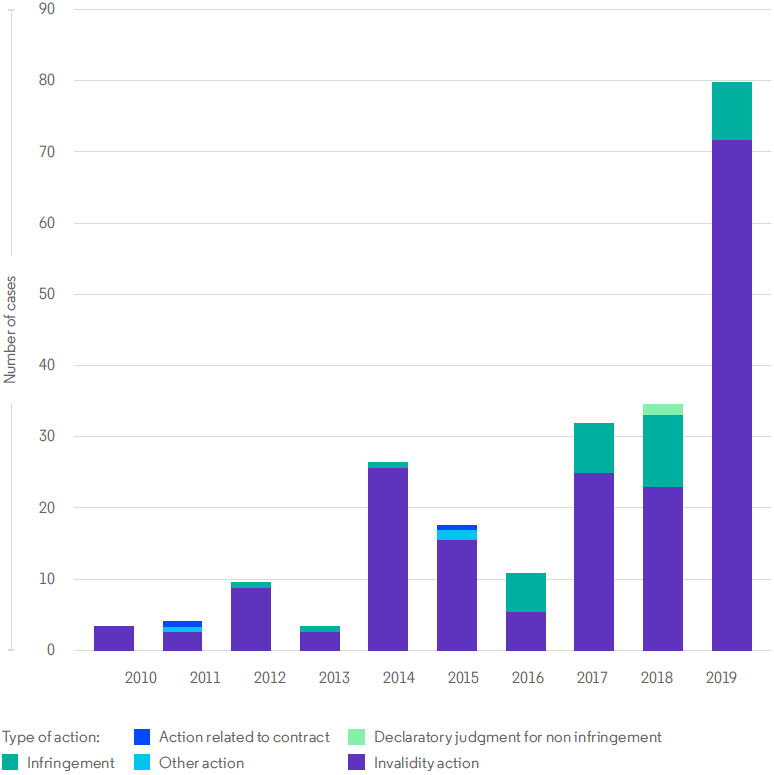 Please note that the year indicated is the year of filing. If this is unavailable then the earliest known document in the case is referenced.Source: Darts-ip

The map of NPE litigation

Figure 2: The geographical distribution of NPE litigation in Mainland China 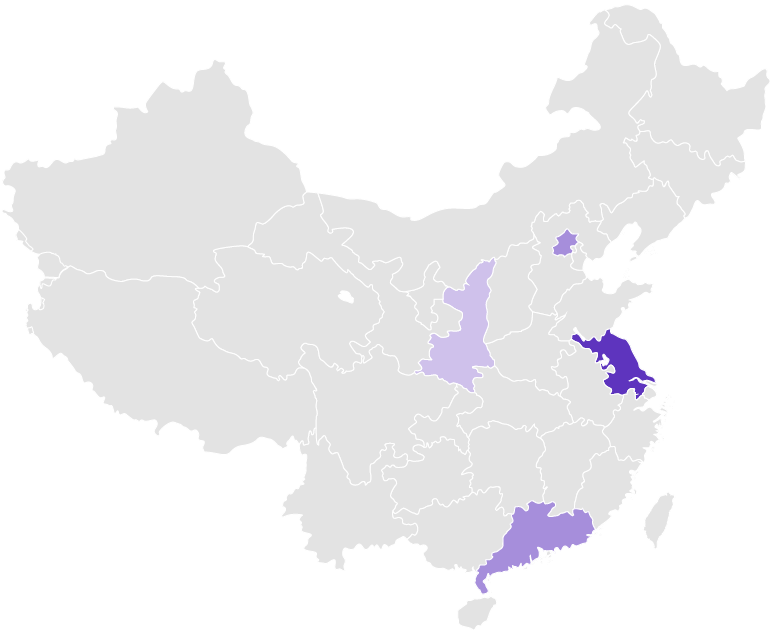 Figure 2’s map presents geographical distribution of all actions except for invalidity actions. The darker the purple is, the more cases occur in the area.Source: Darts-ip

The technology of patents involved is mainly distributed in the field of electronic communication techniques, with the largest amount of cases in wireless communication networks, as the result of the intensive innovation, fierce competition and rapid development of domestic communication industry.

The patents include both NPEs and non-NPEs (For example, NPEs that filed an invalidity action against non-NPEs.)Source: Darts-ip

The graphs below compare the right validity of NPE asserted patents to general patents (understood here as patents belonging to any party, regardless of their type). The bar graphs of Figures 3 and 4 illustrate the scope of protection extended to the patents. Purple indicates a full scope of protection based on the application, dark green represents patents that have been granted protection but with a reduced scope, and light green represents revoked patent applications.

According to Figure 3, the percentage of NPE patents that are valid without any reduction to the scope of protection5 is 8% lower than with general patents, suggesting that NPE patents are weaker. However, the revocation rate for both general and NPE patents is comparable.

Figure 4: Validity rate of challenged patents owned by NPEs in China versus other jurisdictions

Figure 4 suggests that NPE patents considered valid, without any reduction to the scope of protection, is very low in South Korea, at 11%, and very high in Japan at 40%, while China is in between those numbers. When looking at other jurisdictions, we can see that the NPE patent validity rate in China is close to that in the U.S., and significantly higher than in Europe.

The analysis of the statistics examined above reveals these key trends in NPE litigation in China: