“Sacubitril, valsartan” is a new drug developed by Novartis for the treatment of heart failure and was named Entresto® in the market. Entresto® is a kind of salt complex which is composed of two active ingredients – Sacubitril and Valsartan. It uses valsartan to block the angiotensin II type-1 (AT1) receptor and sacubitril to inhibit enkephalinase.

Entresto® successively obtained the approval to launch in the United States and the European Union in 2015 and was approved by the China Food and Drug Administration (CFDA) on July 26, 2017. As an original drug, Sacubitril valsartan’s relevant patent disputes have always attracted attention worldwide from individuals in the pharmaceutical industry. In this article, we provide litigation information and case statistics about Sacubitril valsartan’s patent disputes  (including administrative hearings, invalidity/cancellation cases, infringement cases, etc.) to provide comprehensive insights into the litigation landscape of the drug.

How to run the search in the Darts-ip database:

B: After clicking the ”Insights” button, you will be taken to four interactive graphs that provide a detailed overview of the global patent litigations relating to “Sacubitril, valsartan” as Fig.2 shows. 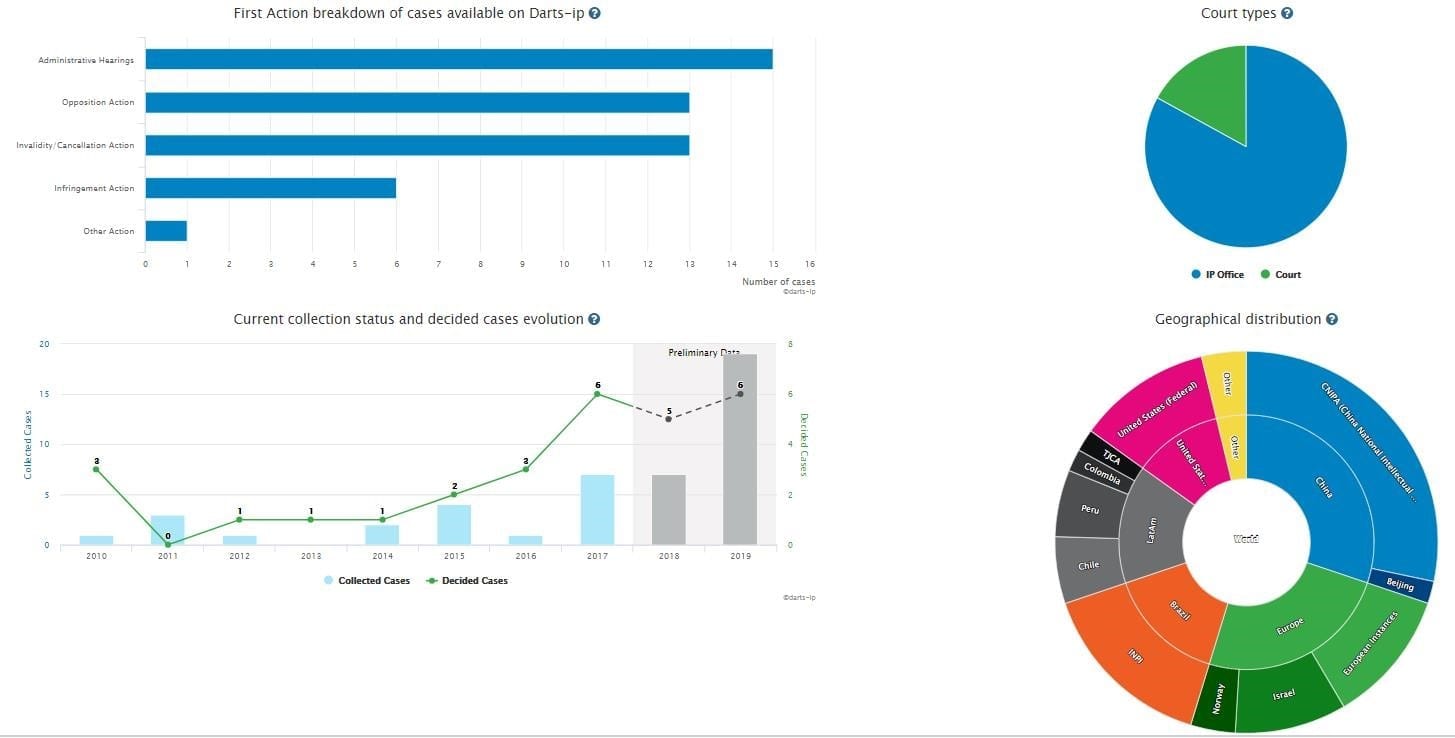 As the diagram titled “Current collection status and decided cases evolution” shows, the quantity of the disputes has kept a trend of rising steadily during 2011 and 2016, and then sharply increased in 2017.

As the pie chart titled “Geographical distribution” shows, all of the cases are distributed in China, Europe, Brazil, Latin America, the United States, India, and South Korea. Cases in both China and Europe account for half of the cases.

Darts-ip analysts around the world manually encode and extract the points of law and decision outcomes of the judgments through reading and analyzing, which makes it possible for users to grasp the conclusions of the judgments (such as the winner and the patent validity) easily and conveniently no matter what language a document is written in. (Shown in Fig.3) 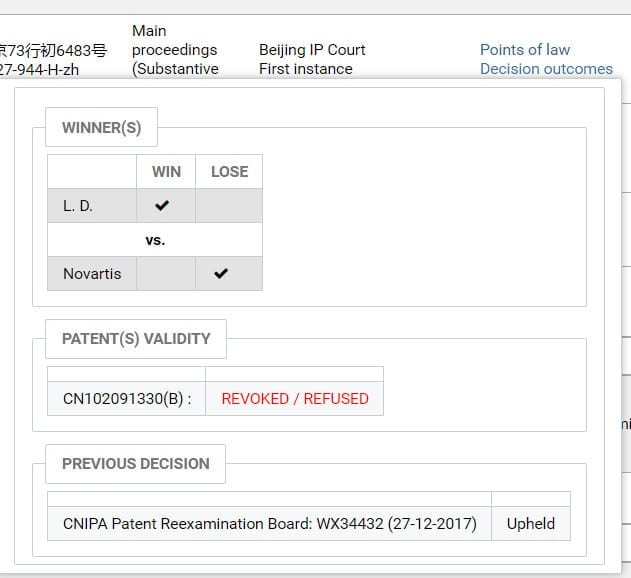 According to the statistics of the above-mentioned 21 substantive-decision patent cases of administrative hearings, opposition action, and invalidity/cancellation actions, eight patents were refused or invalidated, four patents were accepted or kept valid, and the validity of the other nine patents is still pending. More details are shown in Table 1.

2.1 Introduction of a Representative Patent Invalidity Case in China

The Decision of PRB: Invalid

However, the patentee was not satisfied and appealed the decision to Beijing IP Court and claimed: 1) Appendix 13 is not suitable to be used as the closest prior art; 2) the discussed claims have inventive step in comparison with Appendix 13 and the other prior arts; 2) the supplementary experimental data ought to be accepted.

The decisions of the Beijing IP Court :

Appendix 13 not only discloses the technical solution of the combination of AⅡ antagonist and Neutral Endo peptide(NEP) inhibitor in the treatment of hypertension and congestive heart failure (CHF), but also specifies the related experimental methods. It is common general knowledge in the field that either AⅡ antagonist or NEP inhibitor has the effect of depressing blood pressure. Therefore, according to the whole content disclosed in Appendix 13, the skilled person in the field can not only be taught to try to combine AⅡ antagonist and NEP inhibitor together but can also predict the effect of depressing blood pressure through a combination of these two medicines; and the skilled person in the field can further develop a new type of compound for treating hypertension from the ingredients.

Furthermore, Appendix 14 and 15 disclose that valsartan is a kind of antagonist with a good hypotensive effect. Appendix 12 discloses that AHU377 is a NEP inhibitor that can be used in the treatment of hypertension. Therefore, based on Appendix 13, the skilled person in the field has the motivation to combine valsartan and AHU377 and predicts that the effect of depressing the blood pressure. Thus, the claim 1 of the patent is obvious considering the combination of Appendix 13 and Appendix 12,14,15.

Finally, the court upheld the PRB’s decision and all the claims involved were invalid.

There are six total infringement cases relating to the patents of Sacubitril Valsartan, all of which were filed in 2019. Figure 4 shows the progress and geographical distribution of the mentioned infringement cases.

Among them, five cases were filed in the United States, and are still pending.

One case was filed in India. The plaintiff was Novartis while the defendant was Natco Pharma-a famous pharmaceutical company in India. The court has granted a preliminary injunction and the case is currently ongoing.