Biopharma licensing booms with a 47% increase compared to Q2 2018

Total disclosed biopharma licensing exhibited strong growth in worldwide spend during the second quarter of 2019, driving a 46% increase from $22.8 billion to $33.5 billion over the same time period in 2018 (Figure 1). 1,069 new deals (excluding mergers & acquisitions) were registered in Q2 2019, a decrease of 3% from 1,103 in the second quarter a year ago. 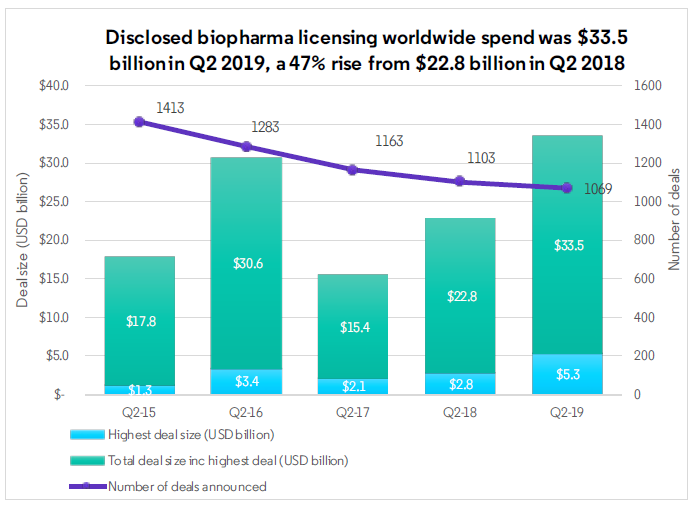 As part of its ongoing coverage of licensing activity in the life sciences sector, Cortellis Deals Intelligence tracked 18 high-value new licensing deals worth in excess of $500 million during the second quarter of 2019. Many of these deals focused on discovery stage assets structured with small upfront and large milestone payments, reflecting the buyer’s spread of risk for progressing to clinical development and beyond, while large pharma continued to invest heavily in small biotechs and organizations with drug discovery expertise and technologies. Oncology remained the predominant therapy area while the highest value deal focused on eye diseases.

Following its purchase of Shire, Takeda divested the former’s lifitegrast ophthalmic solution, Xiidra, to Novartis for $3.4 billion upfront and up to $1.9 billion in milestones, as it prioritizes its portfolio towards gastroenterology, rare diseases, plasma-derived therapies, oncology and neuroscience.

Gilead expanded its presence in the field of protein regulation by enlisting Nurix to screen up to five compounds from its DNA-encoded libraries against abnormal ubiquitin E3 ligase enzymes in the ubiquitin-proteasome system (UPS) that may lead to uncontrolled protein degradation and eventually cancer.

Gilead continued its focus on small biotech through a partnership with Goldfinch Bio to develop human-induced pluripotent stem cell derived kidney cells using its Kidney Genome Atlas registry of kidney disease patients and kidney organoids platform for diabetic kidney disease. A precision medicine approach will then be applied by stratifying patients who are likely to respond to the treatments based on genetic make-up and biomarker response.

As in previous quarters, the big pharma companies dominated the licensing landscape with Bayer, Eli Lilly and Gilead leading the pack.

In the second quarter of 2019, total disclosed deal value of biopharma licensing spend increased by 215% to $11.2 billion from $3.6 billion in the same quarter last year. 235 new deals (excluding mergers & acquisitions) were recorded involving Asia Pacific (APAC)-based organizations, a decrease of 16% from 281 in the second quarter a year ago (see Figure 2). 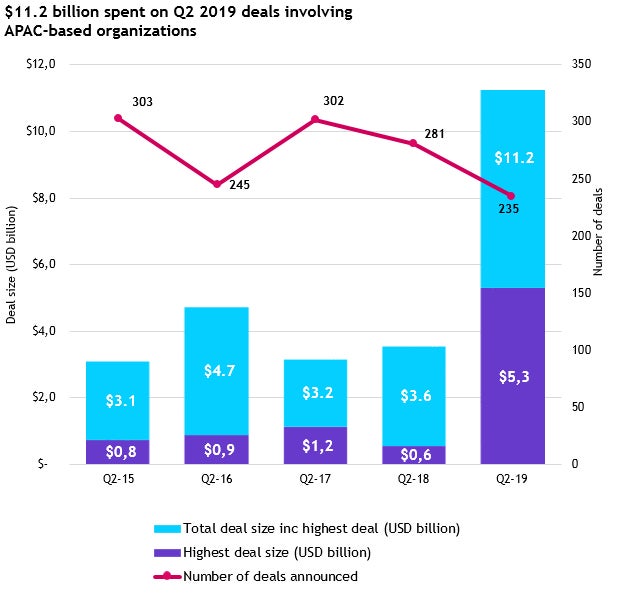 Editor’s Note: All data contributing to this analysis was sourced from Cortellis Deals Intelligence.

The author’s full Q2 2019 analysis, including a deeper look at the Asia-Pacific region, details on key milestones, plus an early outlook on Q3 2019 licensing (including the addition of several significant new deal reports), is available to download. Complete the form to the right to get your copy.