In early 2019, we released an in-depth analysis of 2018 deals activity. Here, we examine more recent activities and discuss mergers and acquisitions in the second quarter of 2019. 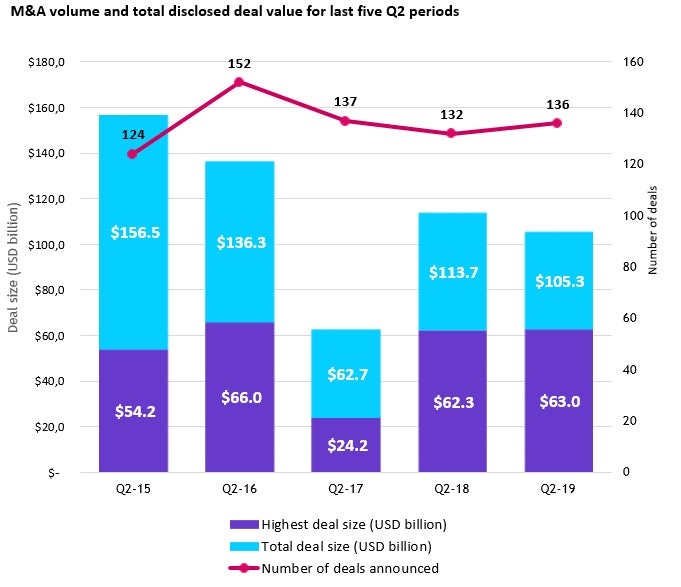 We continue to see the trend of a smaller number of high-value deals driving up total deal value: 27 high-value M&A deals had a combined (and staggering) value of $99.9 billion.  For the purposes of this analysis, we defined high-value new M&As as those worth more than $100 million.  Eleven of those M&As reported were worth more than $500 million each, representing 94.9% of the total disclosed figure of $105.3 billion.

AbbVie led the M&A activity in the biopharmaceutical sector with its $63 billion bid for Allergan. In addition, a significant number of biopharma companies also expanded their portfolios in areas such as oncology, in­cluding Pfizer’s $11.4 billion offer for Array, Merck & Co.’s purchases of Peloton Therapeutics for $2.2 billion and Tilos Therapeutics for $773 million. Dermatology was represented by Nestlé’s decision to divest Nestlé Skin Health for $10.2 billion to a consortium led by the investment firm EQT.

The musculoskeletal market was led by Vertex and its intention to acquire Exonics Therapeutics for $1.05 billion as well as Pfizer’s offer for Therachon for an up-front fee of $340 million plus $470 million in milestone fees. Novartis also acquired IFM Therapeutics’s IFM Tre, a developer of NLRP3 antago­nists for inflammation, fibrosis and neuroinflammation, for an up-front fee of $310 million and $1.3 billion in milestone fees.

Services firms were also presented in this quarter with Catalent’s acquisition of Paragonfor $1.2 billion and Cordlife’s approach for Global Cord Blood for $900 million, as were medical device companies, with the 3M’s purchase of Acelity and its KCI subsidiaries for $6.7 billion, including $4.4 bil­lion and assumption of debt.

As Q2 wound down and Q3 started, the trend of high-value M&As did not slow down. Boehringer Ingelheim announced its $1.2B purchase of AMAL Therapeutics while Agilet moved to acquire Bio-Tek for $1.165 billion.

We’ll continue to monitor the biopharma M&A landscape throughout 2019 for this and other trends.

Complete the form to the right for a complete Q2 2019 analysis, including a deeper look at key M&As, a review of target portfolios by APAC companies and more insight on early Q3 2019 high-value and diversified M&As.

Author’s note:  All data contributing to this analysis was sourced from Cortellis Deals Intelligence.