Immune checkpoint inhibitors, such as the multi-billion-dollar drugs Keytruda and Opdivo, have dominated the immuno-oncology landscape in recent years (see Figure 1), but are not the only classes on the market or in development.

T-cell engager therapeutics, oncolytic virus therapy and adoptive T-cell therapies were among the promising technologies covered at the fourth annual Immuno-Oncology Summit Europe in London in March. Here are some of the highlights tracked by the Cortellis team at the summit which provided, as always, a fascinating window into the fast-paced and exciting field of immuno-oncology. (The full report of the conference is available here)

The phase I trial of AMG-330 has so far enrolled 40 patients and has shown encouraging early evidence of tolerability and anti-leukemic activity, although efficacy is only really seen at the higher doses. Dosing is ongoing at cohort 14 with the optimal dose not yet reached. Of the 35 patients who have discontinued treatment, 27 discontinuations were due to disease progression. The main side effect seen has been cytokine release syndrome.

Joseph Dukes, director, head of biology & program leader at Immunocore, discussed his company’s take on the tumor-dependent-T-cell activation paradigm – the ImmTAC therapy that combines a soluble T cell receptor (TCR), for targeting intracellularly derived tumor-specific antigens, with a CD3-activating scFv component that activates T cells. IMCgp100 is an ImmTAC targeting the gp100 antigen presented in the context of HLA-A2. In a phase I trial in uveal melanoma, toxicity was consistent with the expression of antigen and redirected T cell activity.

Interestingly, rash of grade 2 or above appears to be associated with a better response to IMCgp100 treatment. In trials, prolonged stable disease with reduced toxicity has been reported, as have some partial and minor responses. There is evidence for a potential overall survival benefit above the eight- to nine-month median overall survival typically seen with other therapies, although the data set is small.

To date, median overall survival has not yet been reached. IMCgp100 is currently in phase III development for uveal melanoma; the Cortellis Analyics – Drug Timeline & Success Rates module forecasts a 39% probability of success for this indication, with U.S. approval expected in February 2021.

Frank Tufaro, CEO of DNAtrix, discussed the oncolytic virus adenovirus therapy, tasadenoturev, being developed by the company for glioblastoma, a condition for which the median overall survival from diagnosis is just 15 months. Initial treatment includes maximal surgical resection, but almost 100% of patients experience tumor recurrence, at which point median overall survival is just five to seven months. Tasadenoturev holds various regulatory designations, including Orphan status (U.S. and EU), Fast Track (U.S.), PRIME (EU) and PIM (U.K.), and is currently being assessed in the CAPTIVE (KEYNOTE-192) trial in combination with Keytruda in glioblastoma patients at first or second relapse where no surgery is planned or possible. To date, an excellent safety profile of the combination has been seen in the 48 patients treated so far, with the majority achieving clinical benefit. Long-term survival has been obtained, for example in one complete responder patient who is still alive at over 61 weeks. Topline data from the trial are expected soon.

Peggy Sotiropoulou, director of research and development of Celyad, reported on the development of allogeneic CAR T-cell therapies that use the NKG2D activatory natural killer (NK) cell receptor as part of their CAR so as to target that receptor’s ligands. Celyad’s lead therapy is CYAD-01: an NKG2D-based CAR expressed on autologous T cells that is in phase I/II development. An allogeneic version of this, CYAD-101, also targets NKG2D ligands, but additionally contains a TCR inhibitory molecule that reducing the risk of GVHD. CYAD-101 has shown antitumor activity in mice, and is currently being assessed in the phase I alloSHRINK trial for unresectable colorectal cancer. The first patient was dosed in November 2018, and data are due in the second half of this year. So far there has been no significant toxicity seen, and no GVHD. 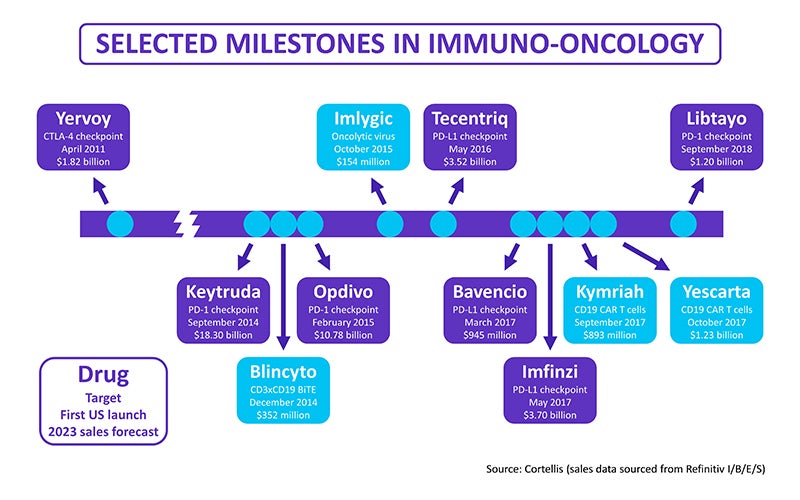 Figure 1: This selection of data from Cortellis tracks targets and milestones for key immuno-oncology drugs along with their forecasts for annual sales by 2023.