Pharmaceutical innovation in the APAC region

The Asia Pacific (APAC) region, already a strong contributor to global market growth for the pharmaceutical, is poised to make continued gains in the coming years.  To understand what is on the horizon, we undertook an extensive, data-driven analysis of innovation in the region – the first such analysis to focus exclusively on the APAC region with a methodology designed specifically for the industry and for less mature markets. Working with a cohort of 929 companies (out of a universe 46,509) in 14 countries/regions, we aimed to understand:

Our methodology for measuring innovation at the country/region and company level was bespoke, as there is no agreed-upon definition of what constitutes innovation, much less what are the surrogate markers of it. We developed a set of largely quantitative parameters that encompassed a company’s broad innovation ecosystem. We then grouped the individual data parameters into three major indices: Early-stage Partnering, Drug Development and Maturity.

As Figure 1 shows, Japan earned the highest score on a country/region level, having achieved high scores in all three indices. South Korea is a strong challenger to Japan’s dominance, lagging only slightly in terms of Drug Development and Early-stage Partnering. The country’s low Maturity score indicates that it has yet to deliver on its potential. The other APAC countries/regions, while relatively strong in Drug Development, are weaker in Early-stage Partnering. 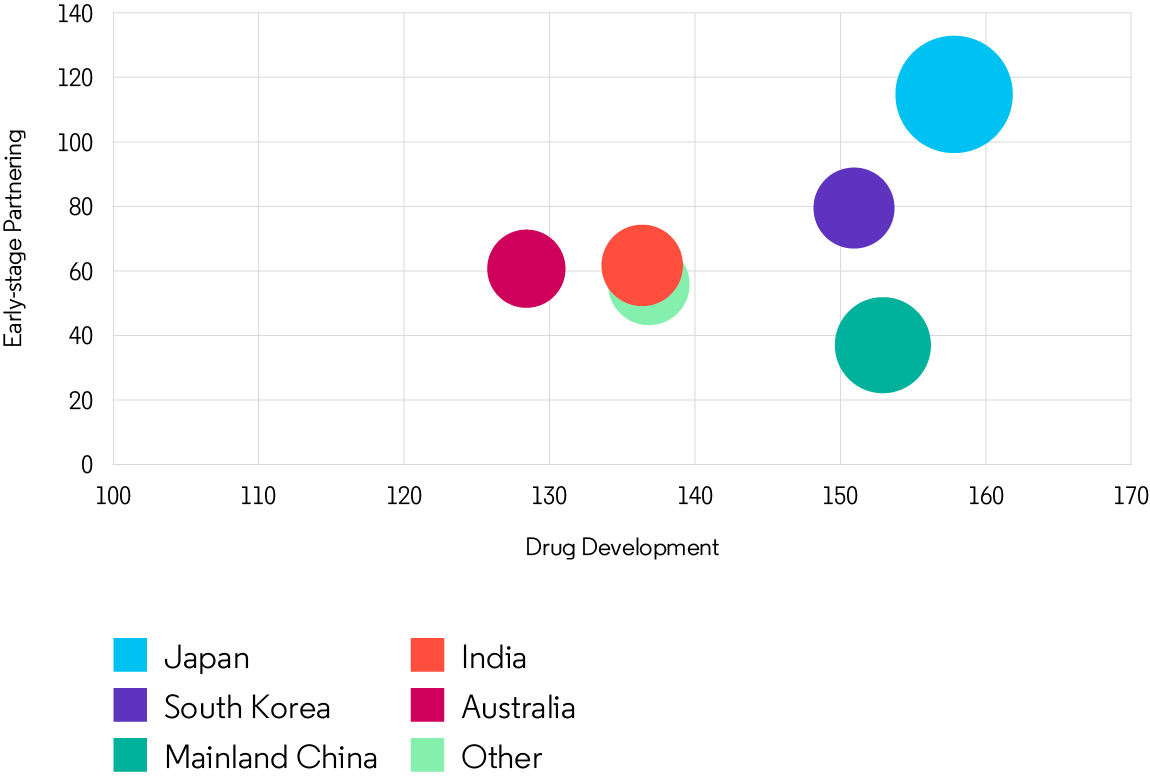 The three major innovation indices are indicated here: Drug Development on the horizontal axis, Early-stage Partnering on the vertical axis, and Maturity in the size of each bubble.
“Other” includes Hong Kong, Indonesia, Malaysia, New Zealand, The Philippines, Singapore, Taiwan, Thailand, and Vietnam.

Within our data set, Mainland China has by far the largest number of pharmaceutical company headquarters, as shown in Figure 2.

We separated out the larger, more established companies – for our purposes, defined as those that have launched 10 or more products (this included many multi-national companies).  We labeled this grouping as “top-tier” companies and ranked them by their overall innovation score. All of the top-tier companies garnered high marks across all three indices. These companies scored the weakest on Early-stage Partnering, which suggests there is still opportunity for them to increase the number of their partnerships with academic institutions. Three observations were immediately apparent from the list of top-tier companies:

Those companies with fewer than 10 marketed products were considered “Small and Medium-sized Enterprises” (SMEs). In looking at a rank-ordered list of the top 100 SMEs, we see that: 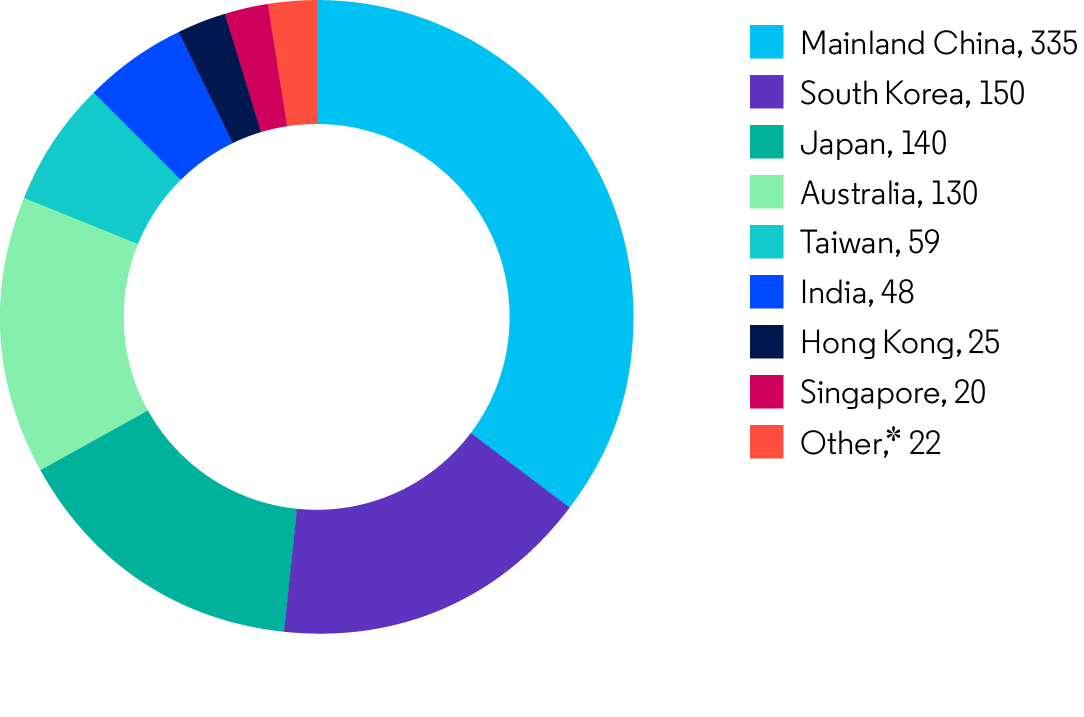 Although there will be continued pressure on healthcare spending in Mainland China, the future looks promising overall for R&D there, and the number of innovative drugs introduced is likely to increase. In particular, Mainland China’s heavy investment in cancer therapies should pay dividends in terms of new product launches, and government reforms should speed new drug approvals.

In Japan, we expect that ranking scores for companies will differ more widely by company size, with market pressures affecting SMEs more dramatically than top-tier companies. There may be a drop in the country’s scores for Early-stage Partnering and Drug Development. Cancer will remain a growth market, although Japan will ultimately experience the same price containment pressures as other countries.

The outlook for innovation in South Korea is largely positive, thanks to government incentives to encourage foreign investment. For the country to raise its Maturity score, it will need to carry more drugs successfully through to commercialization, a goal that should be helped by the government’s investment in artificial intelligence (AI) systems.

The APAC region is a rich source of innovation, but in most countries/regions – Japan being the exception – this is not translating into a strong global footprint. Currently, the world as well as local entities are not benefiting fully from companies’ innovative activities.