During the third quarter of 2018, Cortellis Competitive Intelligence registered 984 new deals (excluding mergers & acquisitions) with a total disclosed deal value of $26 billion as part of its ongoing coverage of licensing activity in the life sciences sector compared to 1,060 and $20.8 billion in the second quarter and 1,158 and $33.6 billion in the third quarter of 2017. The largest deal values over the last few quarters have been in the $2 billion to $5 billion range (excluding AstraZeneca and Merck’s $8.7 billion oncology alliance in 2017), with the $26 billion in total reported this quarter primarily helped by Genentech and Affimed’s $5 billion partnership for immunotherapeutics.

High-value deals worth $0.5B or more

We tracked 39 high-value new licensing deals worth more than $0.1 billion during the third quarter of 2018, including 13 partnerships valued at more than $0.5 billion (Figure 1). 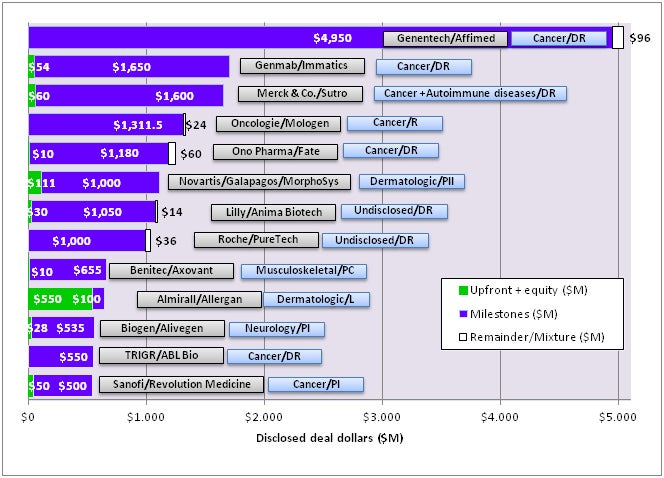 “Oncology remained a common therapeutic area among dealmakers, with seven of the top deals driven by oncology assets.”

Other therapeutic areas included dermatology, musculoskeletal and neurology. Discovery stage assets tended to command a higher fee particularly around oncology, including Affimed’s antibody cell therapy, Immatics’s antibody and Sutro’s protein recombinant cytokine derivative. Many of these discovery and early clinical stage deals tended to be milestone based, motivating the licensee to achieve clinical/post-clinical goals, while the deal focusing on the only launched assets in this group (Allergan’s five dermatology brands) consisted almost entirely of an upfront payment.

Immatics and Genmab joined their efforts to discover and develop novel bispecific immunotherapies, including antibodies and/or T-cell receptor (TCR)-based bispecific therapeutics, for multiple types of cancer, using Immatics’s XPRESIDENT technology. Gemmab would license up to three targets, with an option for up to two additional targets at an undisclosed predetermined value. Immatics would gain $54 million in an upfront fee and up to $550 million for each product.

Also, Merck & Co. entered into a $1.67 billion alliance with Sutro Biopharma for the development of new immune-modulating cytokine derivatives, applying Sutro’s cell-free protein synthesis technology and site-specific conjugation platform, against oncology and autoimmune indications. Merck would pay Sutro an upfront fee of $60 million and up to $1.6 billion in milestones, as well as tiered royalties.

Licensing activity in the Asia-Pacific region

China and Japan continue as the epicenters of licensing activity in the Asia-Pacific (APAC) region, with cancer, neurology and infectious diseases as key indications. A total of 56 deals worth more than $1.2 billion were tracked for China-based companies, including the $0.3 billion pact between Harbour Biomed and Sichuan Kelun-Biotech for anticancer recombinant humanized monoclonal antibody KL-A167. Japan-based companies also showed similar strategic trends reporting 50 deals with a total disclosed value of $1.5 billion, led by the $1.25 billion oncology pact between Ono Pharmaceutical and U.S.-based Fate Therapeutics.

“China and Japan continue as the epicenters of licensing activity in the Asia-Pacific (APAC) region, with cancer, neurology and infectious diseases as key indications.”

Most of the top APAC deals focused on early stage candidates across oncology with non-APAC partners ranging from the U.S., the U.K. and Denmark.

Editor’s Note: This article was excerpted from the author’s full third-quarter report, which includes 12 additional charts and tables; deeper analysis into APAC deals, including Ono and Fate, Benitec and Axovant and TRIGR and ABL; a closer look at the quarter’s most prolific dealmakers, notably Novartis and Pfizer; as well as early analysis of Q4’s key partnerships.

Also, join Clarivate Analytics deals experts Jamie Munro and Laura Vitez at our annual Deals and Portfolio Review live in San Francisco during the week of the 37th J.P. Morgan Healthcare Conference. For more information and to register for one of the three free sessions, click here.