History of the patents at issue:

Three patents are at issue and every case stems from the Japanese patent application JP2000564662 filed on August 11, 1992 under the title “Combination therapies for B-cell lymphomas comprising administration of anti-CD20 antibody.” Eight divisional applications have since been filed as shown in the chart below. 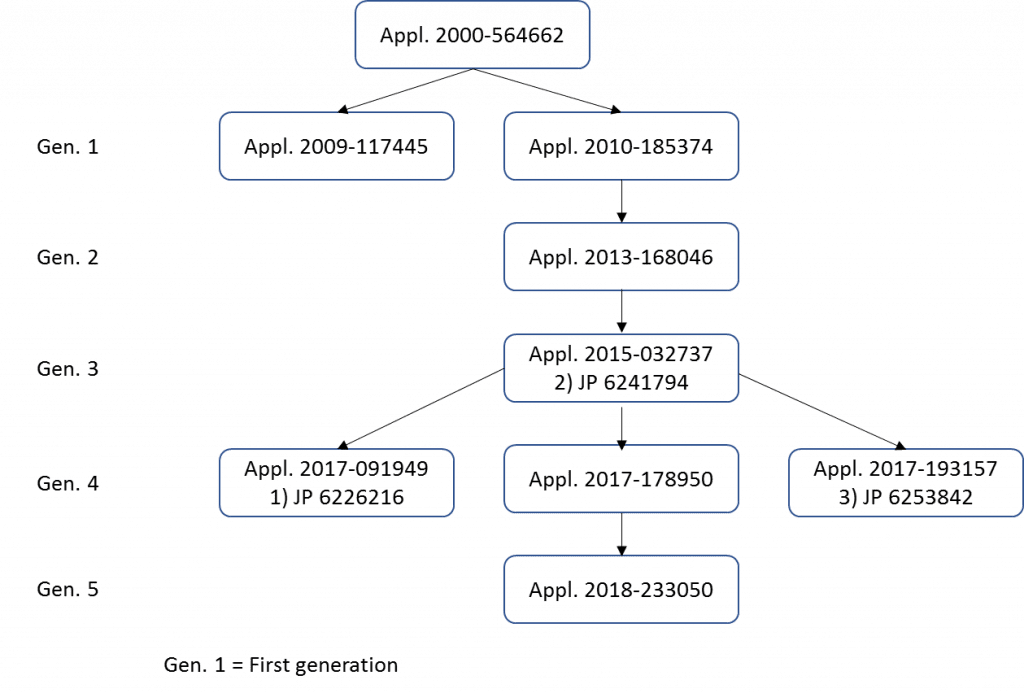 The court dismissed the Plaintiff’s claim on the following grounds:

First, Patents 1 and 3 violated the Patent Act, Art 36, paragraph 6, item 1 (support requirement) and should be invalidated by a patent invalidation trial. Second, the biosimilar is not included in the claim scope of Patent 2.

The court’s decision turned on the phrase “in the middle of chemotherapy with (CHOP)” of Patent Invention 1.

A pharmaceutical composition comprising of rituximab for use in combination with a therapeutic regimen in a human subject for the treatment of low grade/follicular non-Hodgkin’s lymphoma (NHL), wherein an effective amount of the pharmaceutical composition is administered to the subject in the middle of chemotherapy with cyclophosphamide, doxorubicin, vincristine, and prednisone (CHOP) (emphasis added).

At the time of filing the divisional application of Patent 1, the word “simultaneously” was used instead of “in the middle of” and was subsequently replaced with “in the middle of” by an amendment during the examination process to solve novelty and inventive step rejections.

“Simultaneously” can be construed as meaning that each CHOP drug is administered in turn with rituximab, i.e. the administering of rituximab during a recess in the drug treatment. This embodiment was disclosed in the prior art.

On the other hand, “in the middle of” has a different implication than “simultaneously” and does not imply administration during recess of the drug treatment according to the argument submitted by the patentee in the course of the patent examination.

The court decided that “in the middle of chemotherapy by (CHOP)” should be understood as meaning the drug treatment term with each CHOP therapy drug and not during the recess of drug treatment, throughout the repeated drug treatment schedule.

According to the description in Patent 1, rituximab was administered “subsequent to CHOP”, with no description or suggestion in the claimed use of Patent 1 that the composition comprising of rituximab should be administered during the same treatment term with each CHOP therapy drug. Therefore, the court concluded that Patent invention 1 was not supported by the description and Patent 1 violated Patent Act. Art 36, paragraph 6, item 1.

As for Patent 2, the key for the sufficiency of infringement was what “CVP” means in Patent invention 2-1.

The court interpreted CVP or CVP therapy to mean chemotherapy with cyclophosphamide, doxorubicin, vincristine, or prednisone. Pertaining to the biosimilar, the court also found:

In the package insert of the defendant’s product, it is described that “when combined with other antineoplastic agents” in the dosage and administration column, and also described that “When combined with other antineoplastic agents, understand thoroughly the contents of the [Clinical Outcome] section with regard to the administration interval and administration timing, etc. examined in clinical trials of the prior biopharmaceuticals, and refer the latest guidelines in Japan and overseas.” as precautions relating to dosage and administration.  In the clinical results column, it is stated that the respondent formulation or prior biopharmaceutical was administered by the R-CVP regimen to patients with untreated advanced follicular lymphoma as the clinical outcome of the defendant formulation, and also stated as clinical results of prior biopharmaceuticals that remission induction therapy with R-CVP regimen was conducted for patients with follicular non-Hodgkin lymphoma (NHL) in a phase III clinical study (PRIMA study).

Further, according to all the evidence (Exhibit-Ko 12, 35) and purpose of the arguments, the R-CVP regimen described in the package insert of the defendant product is a regimen to administer rituximab on day 1, cyclophosphamide (CPA) and vincristine (VCR) on day 1, and prednisolone or prednisone (PSL) from day 1 to day 5.

The court definitively concluded that the defendant’s biosimilar is not covered by the claim scope of Invention 2.

This case is the first court decision in the biosimilar patent battle arena in Japan. In August and October in 2017, injunctions were filed to an MA application for Herceptin biosimilars (trastuzmab), but the cases were abandoned or withdrawn right after filing, with no decision being handed down.

Recent trends point to invalidations being found simply by a violation of the written description requirements such as support and enablement, and this case, a lack of support requirement was enough for invalidation. In addition, it has become common practice to repeatedly file a divisional patent application to keep the patent pending with the JPO. In this case, divisional applications were filed up until shortly before the patent expiration as shown in the above chart. Ironically, it was this repeated filing of the divisional application where the phrase “in the middle” was inserted in the claim, after not being present in the original specification, which lead to the invalidation.

As for the sufficiency of infringement, there was a detailed discussion about chemotherapy combined with rituximab. Chemotherapy is performed in combination with approved medicines. The effects are often different depending on the types of drugs used, the order of administration, the administration period, the presence or absence of a drug recession period and the length of the drug recession period. In short, there are various regimens. This can result in inconsistencies among practitioners over what the regimens are called and what treatment is actually provided. The scope of a patent that protects a product is easier to enforce if it is linked to the indications, usage and doses described in the package insert, so patent prosecutors need to pay close attention to what chemotherapy and treatment labels such as CVP actual entail.

Finally, with the increasing number of biosimilars (10 products until 2017, 8 products since 2018), we expect a corresponding increase in patent infringement lawsuits in the future. However, for biopharmaceuticals, it is difficult for a third party to fully grasp the patents protecting a product. The same holds true even for the rights holders. It is more difficult for them to get a handle on all the patents protecting their biologic products than it is for their generic drugs. To help has navigate such an environment, we need to learn about cases in the other jurisdictions, such as the patent dance in the United States and opposition in Europe to determine litigation risk and what to expect in litigation.