Clarivate U.S. market access experts discuss on recent mergers, cause of these mergers and their impact on the healthcare system. Read more.

Changes in the U.S. healthcare industry, many of which were prompted by the pandemic, are driving consolidations to cover gaps in care and stabilize revenue streams. Payers are engaging in non-traditional mergers, such as the announcement by UnitedHealth Group’s Optum unit to buy Change Healthcare to strengthen its analytics, technology and revenue cycle management capabilities. Payers are also focusing on horizontal mergers to strengthen their market position like many provider groups across the nation. Telehealth claims increased significantly due to COVID-19, which led to a flurry of merger deals in the telehealth space that were uncommon pre-pandemic. All of this consolidation activity is changing the way healthcare will be delivered in the future.

Centene’s acquisition of WellCare was undoubtedly one of the largest consolidations in managed care in 2020. Overall merger activity is higher in the eastern United States as this region is concentrated with hospitals and health systems, and health systems are known to engage in integration with other providers to solidify their presence. With geographical expansion due to mergers, providers can expect an increase in their negotiating clout.

A few notable examples include:

Chart 2: Payer and provider mergers in the United States 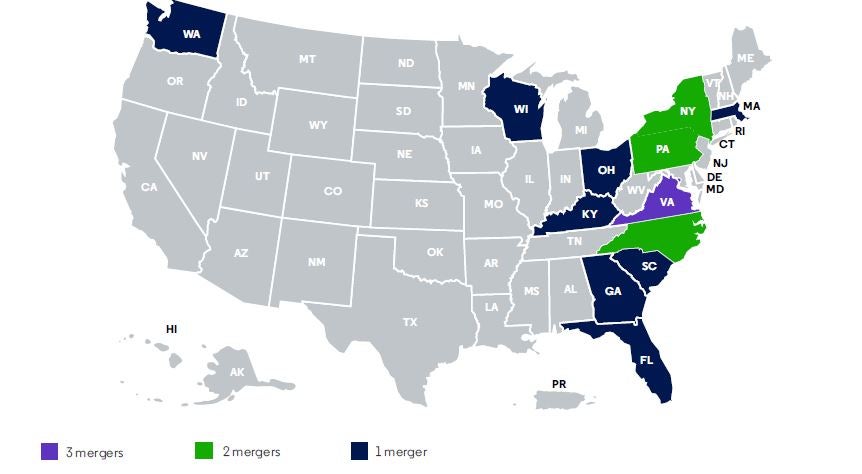 In June and July 2020, the numbers of U.S. physicians conducting virtual patient consults had doubled in comparison to late March and April 2020, according to a survey done by Clarivate. The telehealth industry is expected to see a compound annual growth of 18.43% and reach $22.92 billion by 2025.

COVID-19 and its impact on mergers and acquisitions

The ongoing COVID-19 pandemic has been a hurdle for completion of some potential mergers, such as the Fox Chase Cancer Center and Thomas Jefferson University deal. At the same time, COVID-19 prompted the acquisition of Passport Health Plan by Molina, as Passport faced financial difficulties after the loss of its managed care contract due to the pandemic.

Some deals, such as the Centene and Magellan Health merger, focus on priorities beyond expansion, such as behavioral health services or payment processes. The pandemic has placed more emphasis on the need for a virtual healthcare system, increased mental health support and systems to handle the surge in claims.

While telehealth usage decreased in 2021 (Clarivate claims data, as of July 2021), it is not expected to regress to pre-pandemic usage. Telehealth became popular among patient with behavioral health concerns (Clarivate claims data, as of July 2021) — making a strong case for more consolidation deals involving organizations that support these services. Additionally, the rise in digital and virtual care companies have helped level the playing field for small insurers by simplifying access to care. We expect the volume of mergers to continue to increase as the industry rebounds from the pandemic and the economy stabilizes.

Get a comprehensive and granular view of the healthcare ecosystem and market dynamics and how to break down barriers to access with Clarivate market access intelligence.