G.D. Searle (currently Pfizer) owns patent JP 3563036 titled “Celecoxib compositions”. Celecox® containing Celecoxib as API, indicated for rheumatoid arthritis and various types of pains, is co-marketed by Astellas and Pfizer.  The re-examination period of Celecox expired on January 25, 2015, but generics have yet to launch because of the patent.
On September 30, 2016, Towa Pharmaceutical, one of the largest generic makers in Japan, challenged the validity of the patent and five generic makers joined in support of Towa. The patent survived the first round at the JPO (darts-356-505-F-ja), however, in the second round, the IP High Court overturned the JPO decision and invalidated the patent.

JP3563036
Claim 1:
A pharmaceutical composition comprising particulate celecoxib in an amount of 10 mg to 1000 mg intimately mixed with one or more of pharmaceutically acceptable excipients and one or more discrete solid orally transportable dosage units, wherein D90 of the celecoxib particles at the maximum particle length is less than 200 μm.

In the JPO, four points at issue; lack of clarity, support and enablement, novelty and inventive step, were discussed. The JPO found that the claimed invention satisfied all the points at issue and ruled the patent was valid. Then, Towa and two from the five of the joinders Nipro and Hexal appealed to the IP High Court.
However, the IP High Court simply focused on the support requirement and decided the claimed invention was not supported by the description and found the patent invalid.

In Japan, the support requirement is stipulated in the Patent Act Art 36(6)1 as “A claimed invention shall be disclosed in the description to prevent a patent from being granted for an invention which is not disclosed to the public.”
The claimed invention at issue was defined by a numerical limitation. The IP High Court ruled that determining whether the support requirement of an invention with numerical limitations has been met should be based on whether or not a person skilled in the art could understand how to solve the problem of the invention in all the ranges numerically limited. The court found that the support requirement was not met because a skilled artisan, based on the common technical knowledge at the time of filing, could have understood how to solve the problem of the invention, that is “to provide a pharmaceutical composition comprising a solid orally transportable celecoxib particles with improved bioavailability” in some, but not all, the ranges where “D90 of the celecoxib particles at the maximum particle length is less than 200 μm.”

In this case, an inadequate support requirement was enough for invalidation, reflecting a recent trend in Japan, as discussed in my columns in 2019, upon which invalidations are being determined simply by a violation of the written description requirements such as support and enablement. Further, this case shows us that we need to be mindful that the support requirement for numerically defined inventions is quite strict.

A recent trend of the IP High Court decisions in the pharmaceutical field has been the increase in cases where the support requirement is discussed. 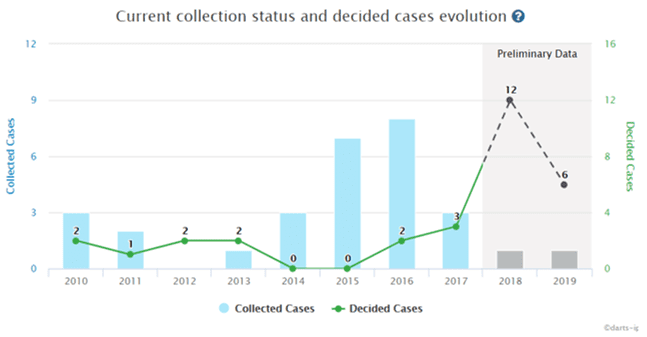 Finally, the first generic may be approved as early as February 2020 since the Celecox patent could not survive in the IP High Court.

* according to the analysis by Darts-ip