Much attention has been given recently to the volume and pace of generic drug approvals by the FDA as that agency has prioritized increasing competition in the market to control costs.  Less attention has been given to the number of first-time Abbreviated New Drug Applications (ANDAs) and the outlook for competition in those generic drug markets.  Examining new generic drug filings against innovative brands with New Chemical Entity (NCE) exclusivity expiring in 2019 reveals robust patent challenge activity, and thus signals a very competitive generics marketplace for these products in the future (See Table 1).

India continues to move up the value chain

So far, the FDA has posted 118 Paragraph Four (PIV) patent challenges against the 16 brands with NCE-1 dates in 2018. (The earliest date on which a generic company can file an ANDA referencing a novel drug protected by NCE exclusivity is one year prior to the expiration of the exclusivity, hence the term “NCE minus 1.”  These ANDAs originated from 44 separate companies, of which 25 (or 57%) were India-headquartered manufacturers (See Table 2). Yet these 25 Indian firms accounted for 68% (80) of the PIV patent challenge applications, underscoring the continuing shift up the value-chain for these firms.  In comparison, all other companies – headquartered across eight countries – filed just 38 ANDAs with PIV certifications in 2018.  Also of note, China was represented with two ANDA PIV filings, both from the Zhejiang Huahai Pharmaceutical Group. 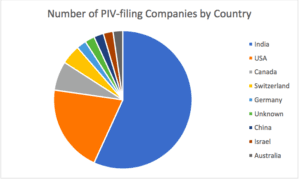 Further highlighting the productivity of India-based manufacturers, four firms each submitted ANDAs referencing seven of the 16 available NCE-1 brands, with two more companies each filing six applications.  Interestingly, it was not the larger Indian players with well-established U.S. operations such as Dr. Reddy’s or Sun leading the pack this past year.  Instead, the top NCE-1 filers included MSN Group, Alembic and Macleods, which while certainly not new to the global generics market, have hitherto not invested so much in higher-risk/higher-value patent challenges.  Clearly, that has changed, and these companies have adopted aggressive strategies to capture more value from the U.S. market, considering the investment necessary to pursue several ANDA projects nearly simultaneously and that litigation alone for each individual patent challenge can potentially cost several million dollars per manufacturer.

The emergence of new leaders, at least in terms of PIV filing volume, should not be surprising as that dynamic has played out in the generics industry repeatedly, and this is what the data show here.  More to the point, while these emerging firms follow the well-proven path up the value chain, the companies that established that model are now shifting to different strategies in search of more sustainable value.  Top incumbents such as Teva, Mylan, Sandoz, Dr. Reddy’s and Sun have all disclosed plans to increasingly focus on more complex generic formulations and/or novel R&D.

As shown in Table 1, five of the 16 brands have been targeted by a dozen or more generics manufacturers so far.  This is consistent with the ANDA filing volumes of recent years.  Most likely, these product markets will become hyper-competitive soon after generics first launch.  Consequently, prices will drop rapidly, eroding the total value available. In such circumstances, competitive costs of raw materials become especially critical.

According to information collected by the Newport Premium research team, about half of the generic dose companies in these markets can be expected to have the capability to produce their own API.  Other firms which are not vertically integrated with these products may still achieve competitive cost structures because the expected number of API suppliers is large.  The average number of API manufacturers with confirmed activity across the total set of 16 NCE product is 20.  Note that at present the average number of active U.S. Drug Master Files (DMFs) is only 13; however, this number is still roughly equivalent to the average number of ANDA filers in each market.  Looked at another way, there is at least one API supplier for each individual finished dose manufacturer, with more likely to scale up over time.

Data for this article was sourced from Newport Premium, a Cortellis solution. The article was adapted from the author’s whitepaper, “Paragraph Four patent challenges continue to attract newcomers: Evidence from NCE-1 ANDA filings in 2018.” Please click here to access the full report.